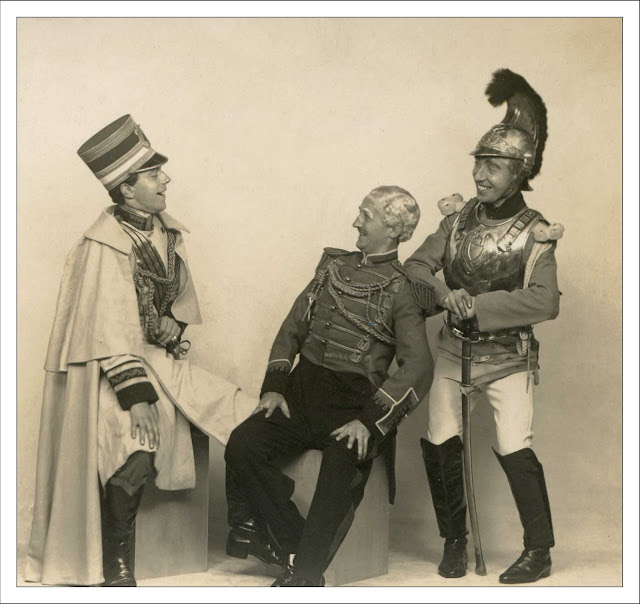 The theme photograph over at Sepia Saturday this week features a band and therefore I am trying to think musically. This is not easy, for the love affair between me and music is entirely one way : I love music and music detests any attempt by me to interpret its' precious muse. The familial hills of the Burnett family were never fully alive with the sound of music : my father would occasionally assault the concertina and grandfather Enoch, I am given to understand, played a not-particularly-mean euphonium. To arrive at proper musical talent we need to leave blood behind and say hello to Uncle Harry.

Harry Moore married my fathers' sister, Annie Elizabeth Burnett in 1933. Just before the marriage he was working as a professional entertainer, touring the country as part of a pierrot show called "The Silhouettes" (See Sepia Saturday 56 for more information). The above photograph probably dates from the early 1930s and shows Uncle Harry (right) taking part in a revue : for some reason Sigmund Romberg's Student Prince springs to mind. Following his marriage, Harry retired from full-time entertaining and combined a day-job as a coal merchant's clerk with evening and weekend work as a pianist in a series of West Yorkshire working men's clubs. His task would be to provide backing for any featured vocalists in addition to providing musical interludes between the comics and the conjurers.

It was the kind of job that made him a musical workhorse - someone who could turn his piano-playing hand to any occasion, be it a family funeral or a joyous wedding. So, if we were in need of some entertainment for the forthcoming 100th birthday party of Sepia Saturday (don't forget, it's next week), he would be just the chap to send for.