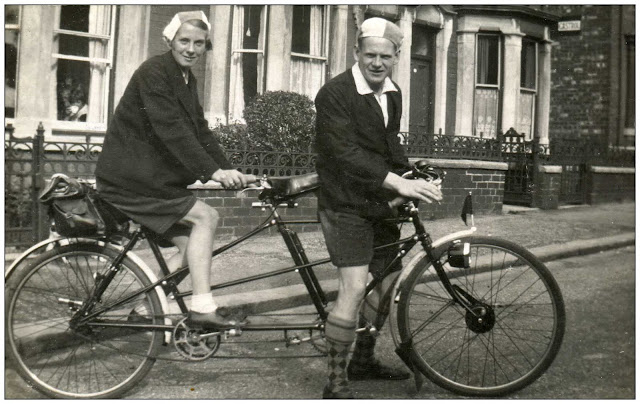 So here we are at last - my Sepia Saturday 100 post. It wasn't a particularly difficult task to decide which photograph to use for this post : the above photograph of my mother and father - Gladys and Albert - seemed to tick almost all of the boxes. It is an image I have featured before and it is one of my favourite old photographs. Both Albert and Gladys were born in 1911 : 100 years ago. And you can almost see the figure of 100 spelled out in the tandem wheels and struts. But, more than anything, it illustrates the wealth of the photographic image as an art form, as a record of social history, and as a stimulant to the memory.

The size of the above image file is about 190KB : not particularly large by modern standards, but still the equivalent of twenty or thirty pages of formatted text. The relationship between the sizes of text and image files is a modern proof of the old saying that a picture is worth a thousand words. But those words, those bits, those bytes are not wasted : for within the humble image can be found a treasure-trove of information. Look at those socks on my father and the way the pattern is woven into the thick wool. Look at the face in the window on the left : observing the scene whilst drinking her morning cup of tea. Look at the sign for Castrol Oil attached to the bay-window of a terraced house like a fish out of a watery soup. Look at the bicycle pump, the hats, the cast iron fences : set your eye and your imagination free to graze the rich pastures of those 190KB

That's the magic of images, And the particular magic of old images is that you are allowed to wander through a foreign land : the past. It is the best entertainment you can get without picking up a pint glass. It is Sepia Saturday.

To see all of the other posts celebrating Sepia Saturday 100 go to the SEPIA SATURDAY BLOG and follow the centenary links.