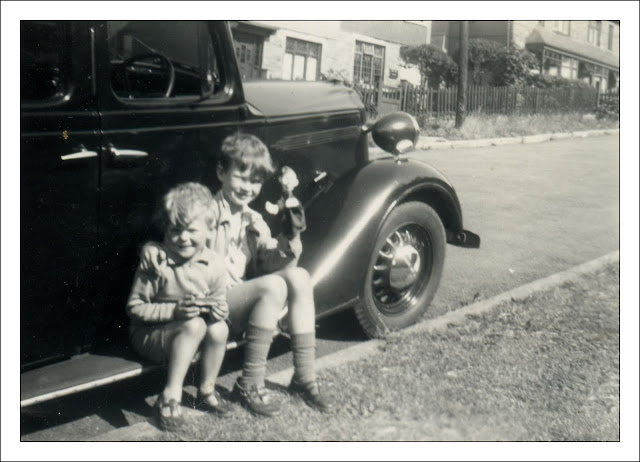 We have a Chevrolet as a theme prompt this week and if I look through my collection of old family photographs there are precious few motor cars. There are plenty of bicycles and tandems and a fair few motorbikes, but until the 1960s, I can't find any pictures of cars. I do know that during the 1930s my father did own - for a very brief period of time - a Morgan Super Sports Three Wheeler, but to the best of my knowledge no photographs exist of this splendid machine. The story goes that my proud father took my mother for a drive on the first day he owned the car and its' single rear wheel got stuck in a tram-line in Halifax and turned the entire vehicle over. My mother - shaken and stirred - refused to ever ride in my fathers' Morgan again and he sold it a week later. The above photographs is about sixty years old and must have been taken in Bradford. I have no idea who owned this particular car: but the two young lads posing on the running board are my brother and I. Equally, I have no idea what strange object my brother has on his hand : hopefully he will post in and enlighten us all. 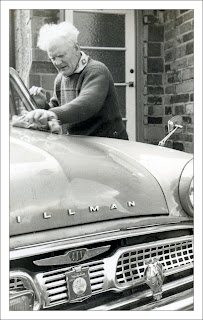 In my second photograph, the car is owned rather than borrowed because by the 1960s my father had finally successfully graduated from motorbikes to cars. This particular Hillman Minx was his pride and joy and it would be polished and shined on a weekly basis. My particular job was to polish the chrome grills and bumpers : a dirty and thankless task that used to leave your hands battered and bruised. My fathers' cars were never new, he would buy them second-hand from the firm he used to work for - the Mackintosh's toffee and chocolate company. They would be ex-salesman's cars and therefore they would have been well used but cheap. He was a proud member of the company car club and you can just make out the Mackintosh's Auto Club badge on the front of the car.  Polishing that badge and that radiator grill until you could see your reflection in it -you can't buy memories like that : not even second-hand.