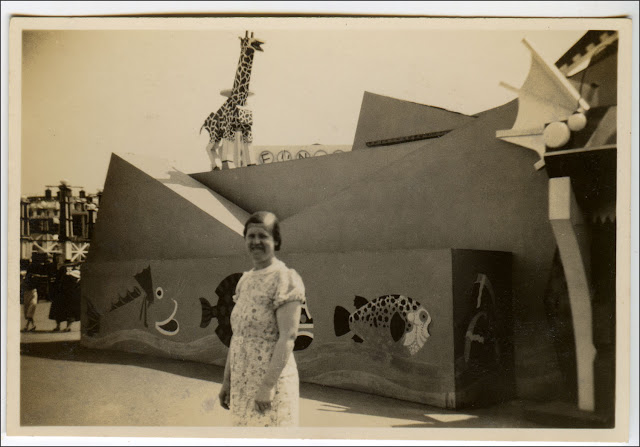 The theme image this week was an extremely busy photograph entitled "Roadside Stand Near Birmingham, Alabama" by that great American photographer, Walker Evans. My matching shot is entitled "Auntie Miriam Near Noah's Ark, Blackpool" by that great Yorkshire photographer, Frank Fieldhouse (a.k.a. Uncle Frank).  Note how the photographer has cleverly balanced the composition so that it appears that a giraffe is stood on the lady's head and two sloping pediments spring forth out of her ears. 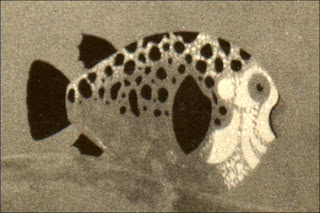 The Noah's Ark ride at Blackpool's famous Pleasure Beach was originally built in 1922 by William Homer Strickler, an American fairground construction engineer who was also responsible for building Blackpool's famous Big Dipper. Strickler must have regularly crossed the Atlantic because he was responsible for many of the famous fairground attractions of the North West of England and met his death in 1930 when he fell from a duplicate Noah's Ark he was building down the coast in Southport. My photograph captures the famous attraction in the mid 1930s when it had already undergone a couple of make-overs to its' external appearance. The internal workings - the cogs and the pulleys that made the floor shake and the animals move - remained the same and can still be seen to this day. 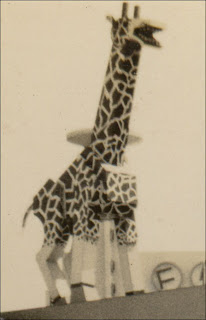 The giraffe, along with the 23 similar wooden animals that adorned the exterior, were added in the early 1930s and were designed by the famous British sculptor, Percy Metcalf. Born in Wakefield in 1895, Metcalf was a fascinating character who can best be described as a jobbing sculptor (I am sure he would have viewed such a description as a compliment as will the only other "jobbing sculptor" I can think of, my brother Roger). In addition to creating fairground animals, he designed pots, war memorials and car mascots. Perhaps he is most famous for his work with coins : he designed the first coinage of the Irish Free State and in 1940 he designed the George Cross medal. He was also involved in the design of the Great Seal of the Realm which is used to symbolise the Sovereign's approval of important state documents. There is something quite appealing about an artist who can turn his hand to ceremonial seals and wooden sea-lions will equanimity.

My first thought was that my photograph was a pale shadow of the level of activity of the Evans original. But. like any good old image, once you scratch under the surface layer of silver salts, there is an intriguing world on display.

TO SEE WHAT OTHER PEOPLE MAKE OF THIS WEEK'S THEME, GO TO THE SEPIA SATURDAY BLOG AND FOLLOW THE LINKS
at November 25, 2011