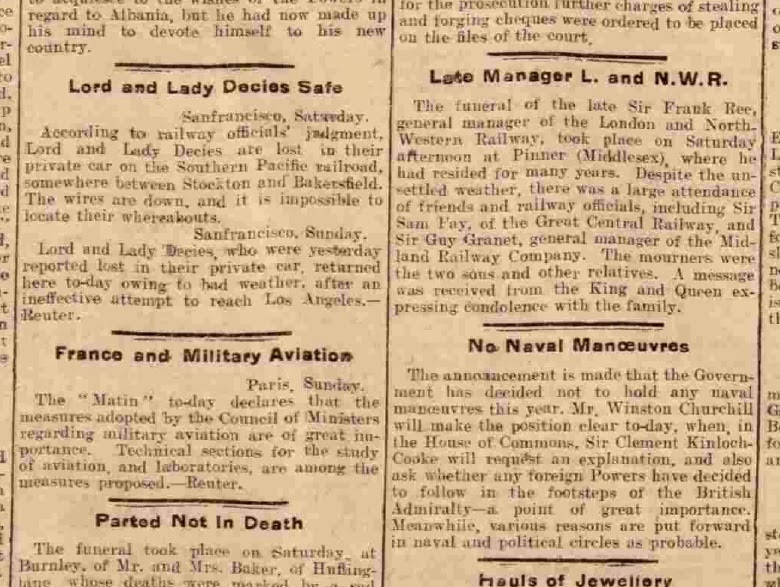 We tend to decry modern journalism for the emphasis on compressed news items which cover great events with all the depth of a plastic paddling pool. We poke fun at text messages and Twitter for encouraging a situation where our appetite for words is restricted by some digital gastric band. But as my exploration of the local and regional newspapers of 1914 constantly shows - little is new in this world of ours. Take this almost random cutting from the Western Times of 23 February 1914: four brief articles, each providing a snapshot of history at a moment in time.

According to railway officials' judgment, Lord and Lady Decies are lost in their private car on the Southern Pacific railroad, somewhere between Stockton and Bakersfield. The wires are down, and it is impossible to locate their whereabouts.
San Francisco Sunday
Lord and Lady Decies, who were yesterday reported lost in their private car, returned here today owing to the weather, after an ineffective attempt to reach Los Angeles.

The "Matin" today declares the the measures adopted by the Council of Ministers regarding military aviation are of great importance. Technical sections for the study of aviation and laboratories are among the measures proposed.

The funeral of the late Sir Frank Ree, general manager of the London and North Western Railway, took place on Saturday afternoon at Pinner (Middlesex), where he had resided for many years. Despite the unsettled weather, there was a large attendance of friends and railway officials, including Sir Sam Fay, of the Great Central Railway, and Sir Guy Granet, general manager of the Midland Railway Company. The mourners were the two sons and other relatives. A message was received from the King and Queen expressing condolence with the family.

The announcement is made that the Government has decided not to hold any naval manoeuvres this year. Mr Winston Churchill will make the position clear today, when in the House of Commons, Sir Clement Kinloch-Cooke will request an explanation, and also ask whether any foreign Powers have decided to follow in the footsteps of the British Admiralty - a point of great importance. Meanwhile various reasons are put forward in naval and political circles as probable. 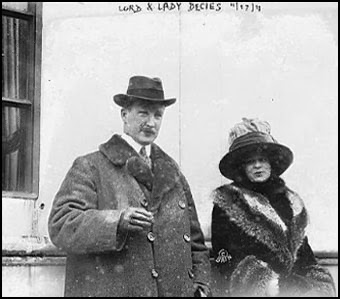 One can look back at these snapshots with the hindsight of history : and what an interesting picture is revealed. John Graham Hope de la Poer Beresford, 5th Baron Decies, who was lost and then quickly found, lived on until 1944. A keen polo player, he served as Chief Press Censor for Ireland before going on to become a Director of the British Income Taxpayers' Association and suggesting that the time may have come for the rich to take their wealth out of the country. How lucky we are that he was not lost in his private car en route to Los Angeles.

Sir Frank Ree was eventually remembered in a way that all railway men would love to be remembered, by having a train named after him. A L.M.S. Patriot Class engine, it was built in Crewe in 1933 and eventually withdrawn from service in 1965. No doubt when the time came its loss was mourned by many a train spotter, although it is unlikely that the Queen sent her condolences.