Sepia Saturday 268 : A Tale Of Tolpuddle And A Sepia Revolutionary 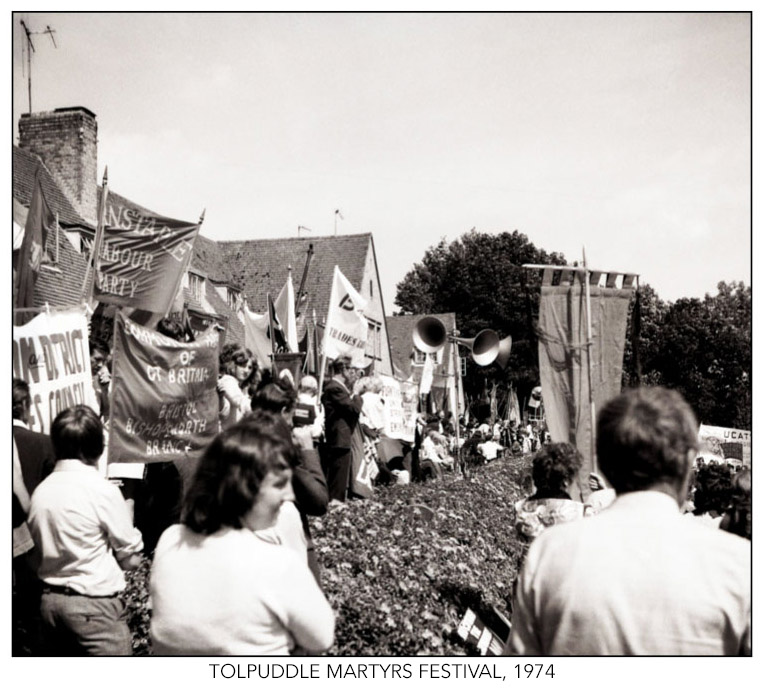 Strange as it may seem, I was not actually present at either of the Russian Revolutions of 1905 or 1917 and therefore I am unable to link directly to this week's Sepia Saturday theme image which features a group of demonstrators marching down Nevsky Prospect in Petrograd. After some digging around within my archives I did, however, come up with this photograph I too back in July 1974 at the Tolpuddle Martyrs Festival in Dorset. Amongst the various Labour Party and Trade Union banners, I can see one from the Communist Party, so it nudges up to the themes like a paid-up fellow traveller.  The photograph also seems to sum up why we have never had a revolution in this country - although undeniably there have been, and are, times when we could do with one. Compare the angular, strident, determined faces of the Russian demonstrators with the arms-folded, passivity of their British counterparts. And how on earth could you have a meaningful revolution starting in a village with a name like Tolpuddle?

For those who don't know the story, the Tolpuddle Martyrs were a group of six early nineteenth century agricultural workers from the Dorset village who were sentenced to seven years penal transportation to Australia for forming a trade union to fight against wage cuts. The British revolutionary fervour following this harsh sentence was limited to signing petitions, marching with banners and renaming streets after the martyrs and this led to their release after just a couple of years.

As I re-scanned the photograph I took in 1974 I noticed that it was beginning to acquire that sepia tone of age. I am all too familiar with this in photographs of my grandparents and even my parents generation, but this is the first time I have noticed it on one of my photographs. I am beginning to turn sepia. Now that is a thought profound enough to spark a revolution.

You can find more takes on this week's Sepia Saturday theme by visiting the SEPIA SATURDAY BLOG and following the various links.