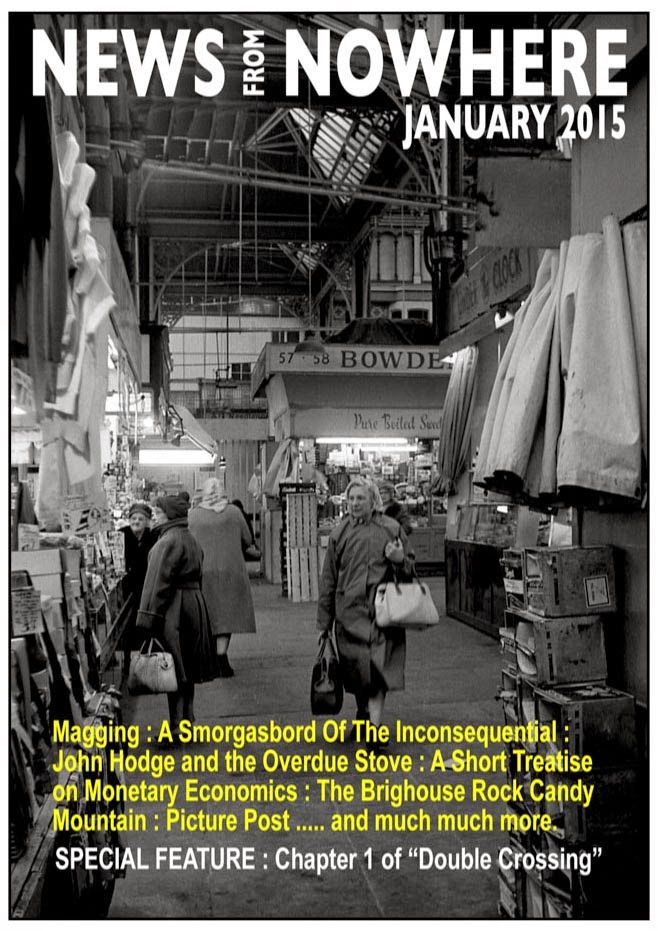 It is a cold and icy weekend, so with nothing better to do, I decided to publish a magazine. Say hello to "News From Nowhere Monthly", the somewhat inconsequential love-child of a man with nothing better to do and an Apple.  For many years I have been a great admirer of those wonderful Victorian weekly and monthly magazines that surfed on the wave of working class literacy and brought their readers everything from recipes to travel writing, popular science to part-works of fiction. Bound volumes of The Penny Magazine, The Cornhill Magazine, and The People's Friend can still be found on the top shelves of second hand book shops and, in exchange for a few pounds, can provide endless fascination to the twenty-first century reader. Strange as it may seem, what such popular magazines were, was in fact blogs - blogs that were a  hundred and thirty years ahead of their time. So why not turn the process the other way around and convert a twenty-first century blog into a Victorian popular magazine.

So I have gathered together the January 2015 content from my three main blogs - News From Nowhere, Picture Post, and Great Yorkshire Pubs - added one or two other things just for the fun of it, and published it as a magazine. What you end up with is a cross between blogging and traditional magazines - magging.  The January 2015 issue of the magazine contains, as a special feature, the first chapter of my great unpublished novel of the twenty-first century, Double Crossing (a somewhat lightweight thriller set in 1934). One consequence of this initiative is that, if the monthly magazine continues (and that is by no means certain), I will be forced to set about finishing the book before too long.

The magazine is currently available in grown-up published form and in PDF format, although I have still not worked out how to deliver the PDF files to the wider world. Equally, it would be rather nice if it was downloadable as an e-Book, but that also needs further technical research (especially as it is image-heavy). The published magazine comes in at £6 a copy - from Lulu, there is a link on the sidebar - but this seems a little on the pricey side of things. I will continue to work on ways of making it available digitally and free of charge and report back if I make a breakthrough.

But, there again, the sun might come out and the ice might melt and the pub might open ..... and the January 2015 issue of the News From Nowhere Magazine might be the only issue ever produced.

UPDATE : I think I may have discovered a way of making the PDF file of the January issue of News From Nowhere Magazine available. CLICK HERE to try it.
at February 01, 2015