50 Brighouse Lads March Over The Bridge 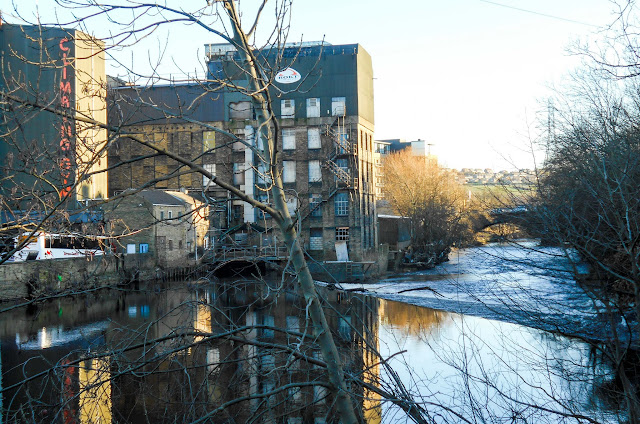 The sun shone again today so I was able to walk down into Brighouse and take this photograph of the River Calder. Everything looks quite peaceful but the houses and businesses that line the river are still coming to terms with the effects of the disastrous flooding of three weeks ago. Both the coach firm and the climbing gym were badly affected when the river burst its banks and cleaning up and drying out is still taking place. Whilst the bridge that can be seen in the distance is still open (unlike Elland Bridge a couple of miles upstream which will have to be completely rebuilt) it is currently undergoing investigations by structural engineers because of a worrying crack that has developed (although this seems to have pre-dated the floods). 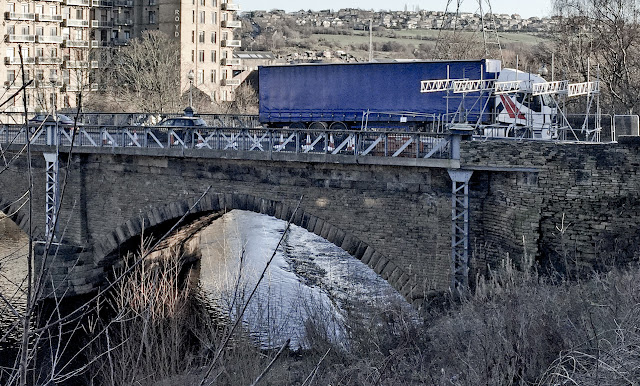 I decided to point my new mobile phone "Layers of History App" at the bridge and see what it came up with. It provided me with a report of a town council meeting which took place in May 1939 which showed that the town councillors of the day had foresight if nothing else. As far as I know, Rastrick Bridge was never widened nor was a new road built. If Bradford Road bridge does have to be closed, we may come to regret that Alderman' Clay's warning was not heeded. 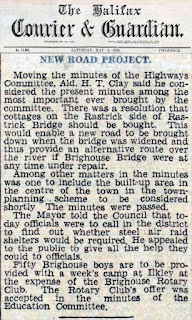 NEW ROAD PROJECT. Moving the minutes of the Highways Committee, Ald. H. T. Clay said he considered the present minutes among the most important ever brought by the committee. There was a resolution that cottages on the Rastrick side of Rastrick Bridge should be bought. This would enable a new road to be brought down when the bridge was widened and thus provide an alternative route over the river if Brighouse Bridge were at any time under repair.

Among other matters in the minutes was one to include the built-up area in the centre of the town in the townplanning scheme to be considered shortly The minutes were passed. The Mayor told the Council that today officials were to call in the district to find out whether steel air raid shelters would be required. He appealed to the public to give all the help they could to officials.

Fifty Brighouse boys are to be provided with a week’s camp at Ilkley at the expense of the Brighouse Rotary Club. The Rotary Club's offer was accepted in the minutes of the Education Committee.

The information of the fifty Brighouse boys marching off to a week's camp in Ilkley is a bonus and yet another example of why this splendid App is a must for all lovers of useless and inconsequential information.
at January 15, 2016