The Curious Case Of The Cow In The Tap-Room 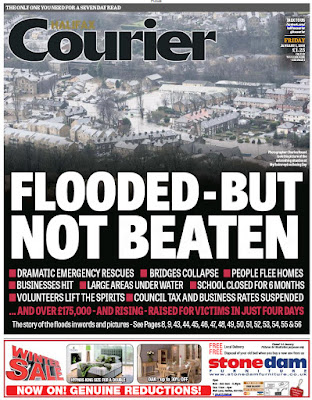 Our local Calder Valley has suffered from some very bad flooding over the Christmas period (check out Tony Zimnoch's excellent Blog for a flavour of what has been going on up the valley). Living on top of a hill, we have been lucky, but local towns such as Brighouse and Elland have been badly affected (although not as devastated as those higher up the valley such as Hebden Bridge and Mytholmroyd).

Whilst no way denying the undoubted reality of climate change, I did toy with the idea that what has actually changed is not the occasional experience of severe weather events, but our almost obsessive reporting of them in a world where every mobile phone user is a potential film cameraman in touch with a plethora of TV news channels. I therefore decided to dig down into history using local newspapers in order to find equally devastating flooding which only achieved a few column inches in the local newspapers of the nineteen and twentieth century.

My first discovery was that there were not as many reports of extreme flooding in the local Calder Valley as I had imaged there would be (thus partly disproving my pet theory). In order to find something on the same scale as the December 2015 floods, I had to go all they way back to November 1866 when floods once again, caused chaos in the area around Halifax. The article in the Leeds Mercury for Monday 19th November 1866 bore an uncanny resemblance to what has been written over recent days. 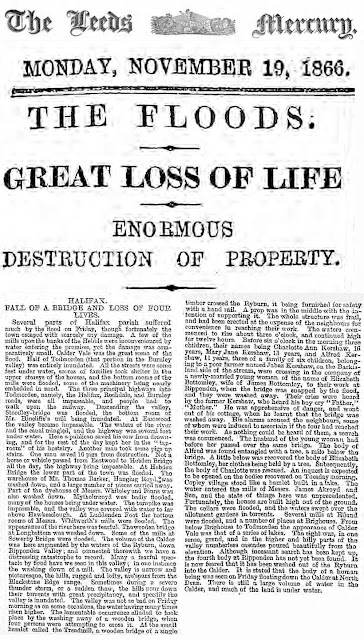 "Several parts of Halifax parish suffered much by the flood on Friday, though fortunately the town escaped with scarcely any damage. A few of the mills upon the banks of the Hebble were inconvenienced by water entering the premises, yet the damage was comparatively small. Calder Vale was the great scene of the flood. Half of Todmorden (that portion in the Burnley valley)was entirely inundated. All the streets were some feet under water, scores of families took shelter in the upper storeys of the houses, and the bottom rooms of the mills were flooded, some of the machinery being nearly embedded in sand. The three principle highways into Todmorden, namely the Halifax, Burnley and Rochdale roads, were all impassable and people had to walk upon the railway...
At Eastwood the valley became impassable. The waters of the river and the canal mingled, and the highway was several feet under water. Here a publican saved his cow from drowning, and for the rest of the day kept her in the "tap-room" of his hostelry. Another man took some pigs upstairs. ... At Hebden Bridge the lower part of the town was flooded. The warehouse of Mr Thomas Barker, Hanging Royd was washed down and a large number of pieces carried away. Mytholmroyd was badly flooded, many of the houses being under water. The turnpike was impassable and the valley was covered with water to far above Hawkesclough...

Several mills at Elland were flooded, and a number of places at Brighouse. From below Brighouse to Todmorden the appearance of the Calder Vale was that of a series of lakes."

It would appear that history has repeated itself some 160 years later, although whether or not I will find a rescued cow in the tap-room of a pub up in Eastwood remains to be seen. In the interests of  historical research I will head up the valley looking for the pub in question ... once the waters have gone down.
at January 04, 2016