It's the 1st of January, the start of a new year, and tradition dictates that my post has to be dripping with resolutions about being a better and more consistent blogger. This year I don't think I will even bother listing what I would like to achieve over the coming twelve months: I have decided to create the list in mid-December instead so it can look back and more accurately reflect what I have actually achieved. Released from the need to construct any such one year plan, I can better concentrate on the things this Blog should be focusing on - meaningless speculation, idle tittle-tattle, and the unfettered exploration of the irrelevant. 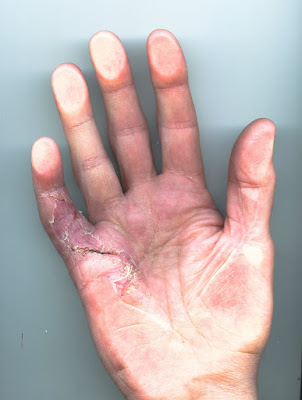 Perhaps I should start with my hand. I had an appointment at the hospital earlier this week and they seemed quite pleased with its progress even though, to me, it feels like my hand has been replaced by a useless lump of swollen lard. I had hoped that the recovery process would be analysed by a series of high tech investigations and scans, but the surgeon took a brief look at it, bent my finger straight with all the enthusiasm of a member of the Spanish Inquisition and said things seem to be progressing well and to report back in another six weeks. I am supposed to have physiotherapy, and each night I have to wear a splint on my hand in  order to encourage my finger to straighten. I can't help thinking that the joints in my little finger would respond better to the carrot rather than the stick, and I am tempted to ditch the tortuous splint and replace it with the promise of a tumbler of Laphroaig if my finger makes efforts to straighten its act whilst I am asleep. Disappointed in not having a hospital scan of my finger to share with you, I decided on a do-it-yourself approach using my desktop flatbed scanner. The results seem quite effective - I must suggest it to the local hospital as a potential way of saving money.

In other news, we are actively investigating the possibilities of a replacement for the irreplaceable Amydog, I am still trying to cure myself of the addiction of buying boxes of old negatives on eBay, we have booked a cruise for later this year .... and a great flood of Biblical proportions has beset Yorkshire. Perhaps I will get around to discussing some of these at greater length in posts to come - it all depends what is in the Grand Blogging Plan for 2016, the details of which I will formulate in twelve months time. For the time being .... A Happy and Peaceful New Year to you all.