The Council Ought To Get Some Ferrets 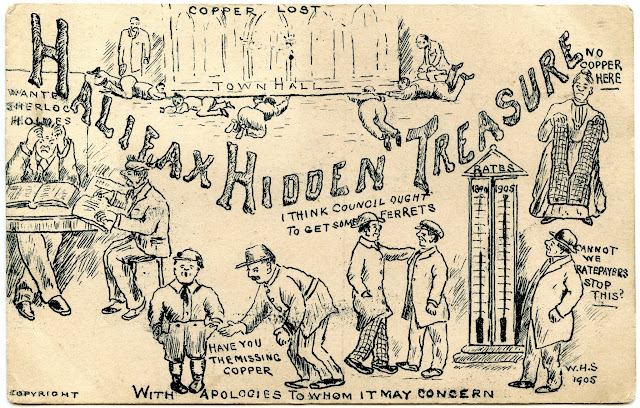 One of most delightful moments of all is when someone comes up to you in the pub with a little envelope containing an old photograph or postcard and says "you might want to put this on your blog". It happened to me last Friday at the Rock Quiz when my good mate Jack passed me an envelope containing a couple of old postcards and some old newspaper cuttings. I will get around to them all in due course, but the one I couldn't resist starting with is this fabulous old postcard dating from 1905.

Prominently entitled "Halifax Hidden Treasure" it is anonymous other than the initials WHS and a copyright warning. The reverse of the card is equally unassuming in terms of details of publishers or printers. All I can assume is that this was a self-published cartoon which was directed at concerns over the municipal budget in Halifax back in 1905. For those from beyond these shores I may need to point out that "copper" is a reference to copper coins and was a term often used at the time to mean small amounts of money. It would appear that in 1905, Halifax Corporation increased the local taxes (known as rates) in order to make up for missing funds. Whether the funds were missing because of incompetence by local government or, more likely, an expansion in the services provided and thus the budget of the local authority, I am not sure and we may never discover.

I have done a detailed internet search to see if anyone else has made reference to this postcard and drawn a blank. Perhaps someone will read this and be able to provide a better explanation of what issues were involved. Or perhaps the Council will finally get some ferrets to ferret out an explanation.

UPDATE
As so often, the internet community has managed to provide colour and context to one of my posts. Within days of the post first appearing I received an email from Stephen Gee:

"The 1905 postcard was drawn and produced by William Henry Stott of West Vale and Elland. Apart from producing many other simllar cards he kept a detailed diary from 1872 - 1935, over 10,000 illustrations and gave great insight into events such as WWI and others even earlier, e.g. The Battle of the Little Big Horn".

A few days later the following comment was added to the Blogpost by Christopher Blakey.

"The WHS was a chap called William Henry Stott. He was a noted local illustrator in Halifax during the late 19th and early 20th century. He worked for the Halifax Courier in the days when they would illustrate stories rather than photograph them.
He produced a series of satirical postcards about life in Halifax which were published by the Halifax Courier. He was also a noted local diarist producing around 40 volumes covering the same period. These were auctioned off a couple of years ago but I'm not sure who bought them.
He content of the postcard refers to the council debate on the rates increase in 1905. When asked why the cost was going up, another councillors is alleged to have responded that the increase was merely coppers and if people had a ferret under their mattress and behind the cushions, they would soon find the required extra money".

My thanks to Stephen and Christopher for that fascinating information.
at January 11, 2016