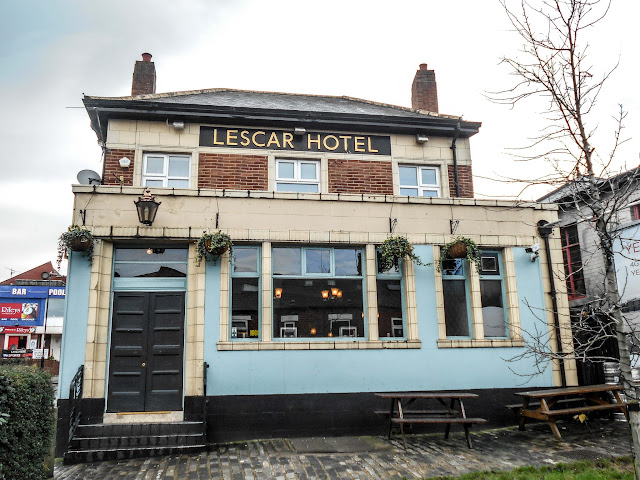 I had an idea for an App yesterday. It came to me as I was aimlessly wandering down Sharrow Vale Road in Sheffield trying to fight off the cold and occupy myself whilst the GLW was looking in shops. Passing the splendid Lescar Hotel and cursing fate which meant that I was driving and thus unable to sample it's beery comforts, I started to ponder on the fact that buildings are layered in history. And the layers are rather like layers of paint on an old wardrobe: you can scrape layers off and discover the ones hidden below. The wondrous App of my invention would allow you to do this - you would simply point your mobile phone at a building (which would be identified by GPS which would then initiate a database search etc etc) and the layers would be revealed. Here is what happened when I pointed my phone at the Lescar Hotel. 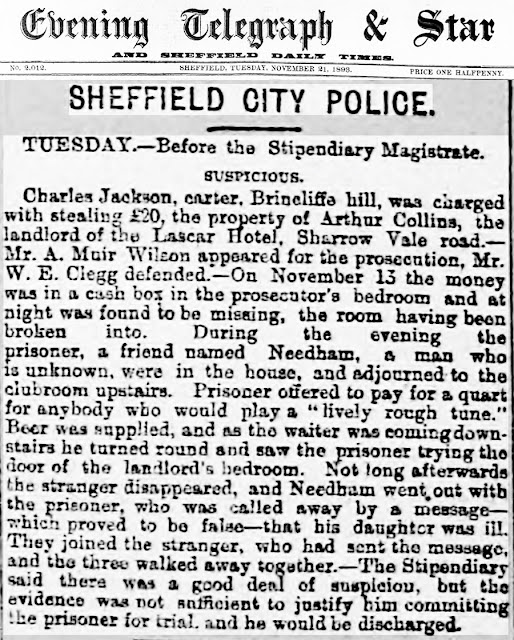 SHEFFIELD CITY POLICE.
TUESDAY.—Before the Stipendiary Magistrate.
SUSPICIOUS.
Charles Jackson, carter, Brincliffe Hill, was charged with stealing £20, the property of Arthur Collins, the landlord of the Lescar Hotel, Sharrow Vale Road. Mr. A. Muir Wilson appeared for the prosecution, Mr W. E.Clegg defended.
On November 13 the money was in cash box in the prosecutor's bedroom and at night was found to be missing, the room having been broken into. During the evening the prisoner, a friend named Needham, a man who is unknown, were in the house, and adjourned to the clubroom upstairs. Prisoner offered to pay for a quart for anybody who would play a "lively rough tune" Beer was supplied, and as the waiter was coming downstairs he turned round and saw the prisoner trying the door of the landlord's bedroom. Not long afterwards the stranger disappeared, and Needham went out with the prisoner, who was called away by a message - which proved to be false - that his daughter was ill. They joined the stranger, who had sent the message, and the three walked away together. The Stipendiary said there was a good deal of suspicion, but evidence was not sufficient to justify him committing the prisoner for trial, and he would be discharged.

Take your eye away from the screen of your mobile phone for a second and glance up at the pub. That must be the landlord's bedroom up there, on the left - the one with the burglar alarm next to it. How fascinating you say to yourself, pleased as punch that you invested a few pounds in purchasing Burnett's Patented Layers Of History App.
at January 14, 2016