A Postcard From The Shallows Of Indolence (Double Crossing 1)

Some years ago I decided to write a book on the back of a postcard, No, that is not quite true; it was on the back of several postcards - 148 of them before I got bored and gave it up. But it was a fascinating experiment and a wonderful aid to productivity, if not creativity. The picture on one side of the postcard would act as a creative stimulus - a set of visual guidelines like the faint parallel lines on a sheet of writing paper. The blank side of the card provided a potential target - I need only write to fill the space available. You still had the frightening experience of sitting down with a blank piece of paper in front of you, but at least it was only a small piece of paper.


Over recent years I have yet again been attempting to write a novel, albeit by more traditional means than my postcard project of twenty years ago. Eighteen months ago, this second novel ran aground in the shallows of indolence, abandoned at the end of ten chapters and 84,000 words. I have tried every approach I can think of to try and restart the project - every approach, that is, other than a return to the postcard approach. So I am going to give it a try.


I am not sure how many of these posts there will be, the chances are that you can't re-float an ocean liner with a few fake postcards to nobody. This little note is simply an explanation: the words will probably make no sense at all (after all, you are starting more than half way through a book you haven't read) and I don't expect you to read them (for the purpose of this experiment, it is enough that I write them). But, if nothing else, you might enjoy looking at the pictures. 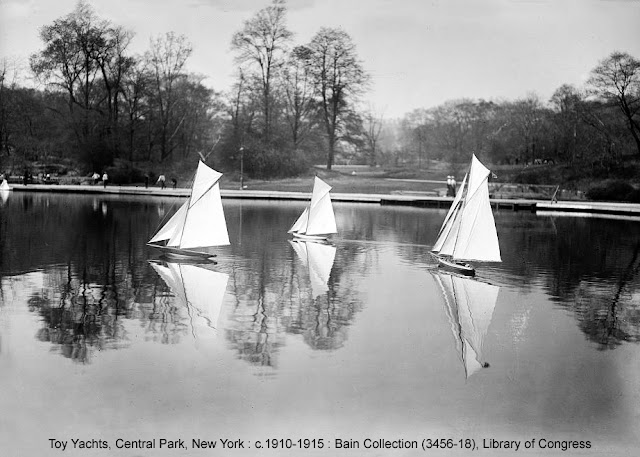 1
Alice watched the ducks move effortlessly across the water, jealous of their graceful indifference to their immediate surroundings. It was Sunday morning and the sun was set high above New York City and the trees of Central Park were filtering its rays, mixing two parts of sun with one part of automobile exhaust to create an urban cocktail that would have been a more suitable recipient of the name "Manhattan" than the more usual mixture of cheap whiskey and sweet vermouth. Alice had strolled down 5th Avenue from her Aunt Winnie's apartment, determined to take a walk in the park to clear her head of the detritus she had gathered during her voyage from Europe. She had quickly found the area of water simply called "Pond" which managed to feel as if it were 100 miles away from the bustle of 5th Avenue rather than just 100 yards.

She smiled when she saw the word "Pond" on the neat wooden board unsure as to whether it was a description or a name. She recalled that it was only last night that Cyrus Summersdale had spoken about a pond, and it took a fair amount of time and illogical deduction before Alice realised he was talking about the Atlantic Ocean. Perhaps to the citizens of this bright and vast continent, that body of water that separated them from Europe, was nothing more than a pond, and to the people that had driven back the frontier of what they saw as civilisation crossing that pond created no greater challenge than that being faced by the ducks in Central Park. But Alice had acquired more than her sea legs during her voyage from Cherbourg, she had acquired a fair degree of cynicism wrapped in a thick shawl of suspicion as well.
at January 08, 2016