Gladys In Blackpool : A Birthday Celebration 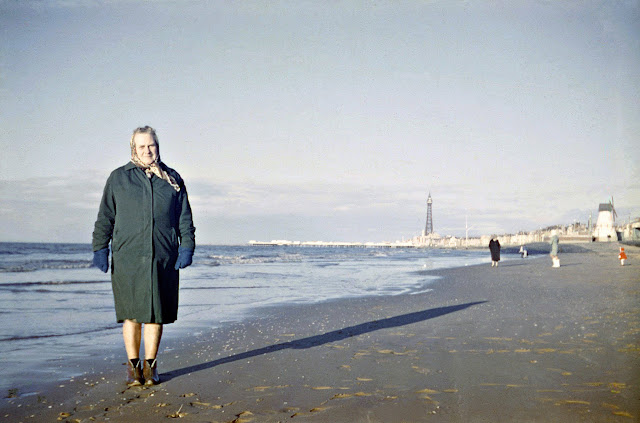 July 27th was my mother's birthday and she would have been 105 years old today. To mark the day I have dug deep into the box containing old photographic odds and ends and discovered an unframed 35mm colour slide dating back to the 1960s. When scanned and cleaned-up it shows my mother, Gladys, stood on the sands at Blackpool - at that point where the land and the water meet, a point that was always her favourite location. The fact that it was Blackpool didn't really matter, she would have been just as happy in Scarborough, or Bournemouth or, I suspect, Tristan da Cunha: as long as she was at the point where sand and sea met and she could gaze out towards the distant horizon looking for - who knows what?

I don't know what because, I regret to say, I never asked her. I doubt that it was the sea that was the draw: she didn't particularly enjoy being on the sea as such. And it wasn't the established seaside paraphernalia that attracted her: she wasn't one for deck chairs and pony rides, hot dogs and cold bathing. I like to think that it was the merging and the margin that appealed to her - the point and which land became sea; the point at which one state became another. 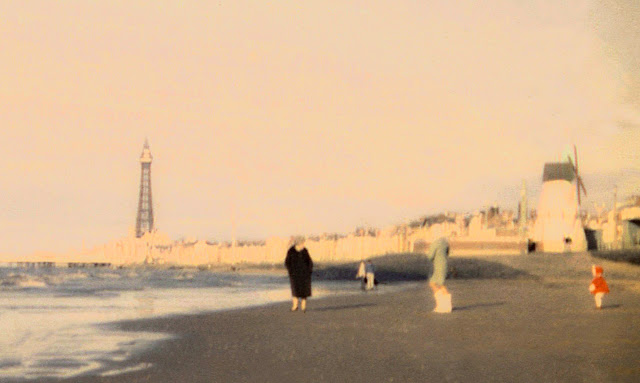 I enjoy the seaside as well as the next man, but it doesn't draw me like it drew my mother. However I am fond of the merging at the margins, the transformation of one thing into something else. I am drawn to that place where an image is transformed from being a factual record into something else. I am not quite sure what that something else is, but the very same photograph of my mother in Blackpool provides a good example. The left of the photograph shows a perfect representation of my mother: wrapped up against the wind blowing off the Irish Sea, anchored to the wet sands in her fur boots. By the time your eye has reached the right of the photograph, something else is taking place - something to do with impressions and shapes and colours and memory.

So this birthday celebration allows both my mother and I to wander the place we love the best, observing the coming together of sea and land, reality and memory. Happy birthday Mam.
at July 27, 2016