Sepia Saturday 338 : A Walk Around My Uncle Frank 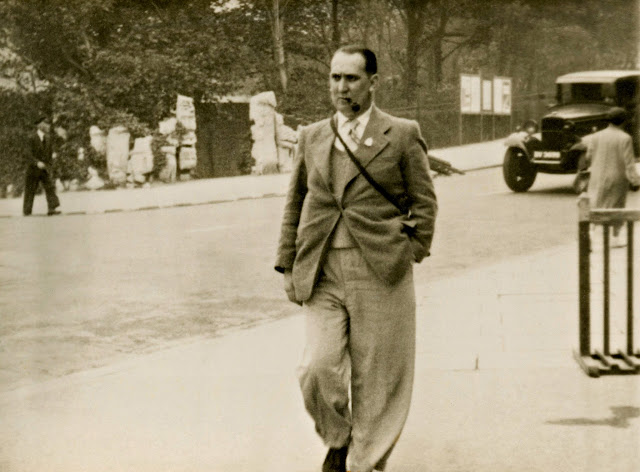 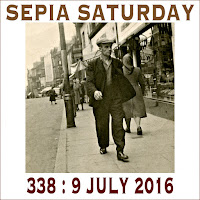 Our Sepia Saturday prompt this week features a man walking down the street. There was an interesting discussion on our group Facebook page as to whether the photo is a "walkie" - that is one of the Walking Snaps that was taken by one of the many photographers that plied their trade by taking random photographs of people walking down the street in the hope of selling prints at a later date. Initially, I decided it wasn't a "walkie" because it wasn't taken at a seaside where walking snaps were most popular; it din't have a details of the photographer or the date on the print; and the print was lop-sided. However on reflection I am not too sure, the chap in the photograph doesn't seem all that interested in having his photograph taken.

My own contribution to Sepia Saturday 338 is a similar photograph and once again I am unclear as to whether it was a "walkie" or simply that Uncle Frank (for it is he) is cultivating a careful image of a man-about-town who is as used to casual photographers snapping his likeness as some suburban Errol Flynn. Whether it is a "walkie", a "snappy", or some carefully executed "selfie": as with all such old photographs there is a wealth of what can be called collateral detail. Let's just examine a little of it. 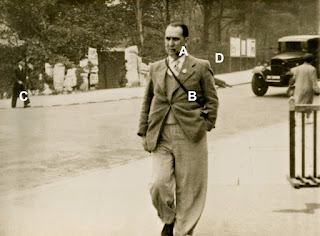 A : Let is start with that pipe (and you may want to click and enlarge the original photograph to see it in more detail). Uncle Frank certainly smoked but I have no recollection of him smoking a pipe - nor have I any other photos of him doing so. But there is something slightly odd about the shape of the pipe and all I can imagine is that there is a cigar butt within the pipe (this is a practice I have often noticed in Belgium and the Netherlands, but never seen in this country)
B : The tell-tale strap of the gas mask holder gives us our first clue as to the date of the photograph. In some strange way gas masks have come to prove far more useful to daters of old photographs than they ever were to that poor generation who had to carry them around.
C : A man in uniform strides into the picture from the left. My feeling is that this is a civil uniform rather than a military one (perhaps a railway worker or park keeper) but this would suggest an early stage of the war before such workers were conscripted into the armed forces.
D : That looks like it might be a park and those certain look like iron park railings. If that is the case once again it would suggest an early stage of the war before all such precious objects were gathered up and melted down to make aircraft parts, shells and other such instruments of warfare.

Any old photograph contains layer after layer of detail. You can keep digging and discovering more and more. It is a walk into history - and a fascinating walk at that.

To see more such walks take a stroll over to the Sepia Saturday Blog and follow the links.
at July 09, 2016