Mad Dogs And Englishmen Go Out In The Midday Snow 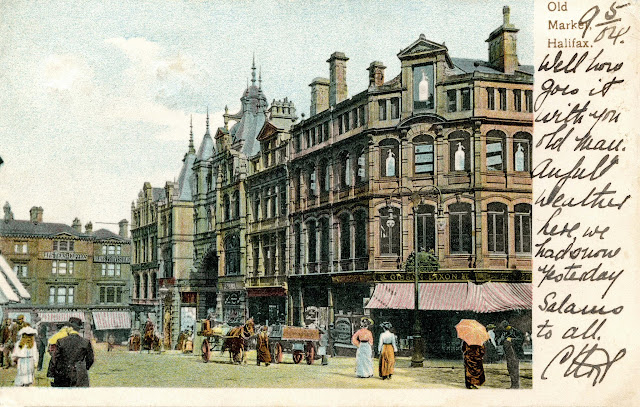 This is a familiar scene to anyone who knows Halifax, and many of the buildings remain little changed to this day. The clothes are different, the shops are different, and the buildings at the bottom of the street are long gone, but the fine looking neo-gothic building on the right of the photograph is still standing. It was built at the end of the nineteenth century at the same time as the neighbouring Borough Market. It incorporates an arcade - the Old Arcade - that provides a lead-in to one of the main entrances of the market. The shop at the corner at the time of this 1904 postcard was chemist shop of Gibson Dixon who managed to sell everything from corn plasters to tonic wine, patent cures to peppermint cordial. 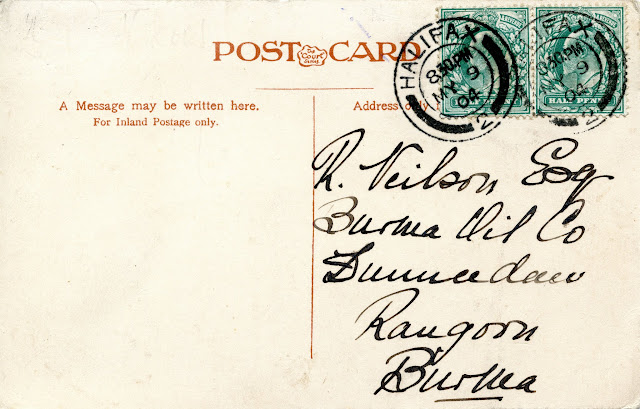 The card was posted from Halifax in May 1904 and it was addressed to a certain Mr Neilson who was stationed with the Burma Oil Company in Rangoon. The chances are that this was Richard Gillies Neilson who was a chemist working for the oil company at the start of the twentieth century. It is not clear who is friend in Halifax was who sent him the card. Whoever he was, he was able to inform Richard Neilson that whilst he was sweating in the noonday sun in far-off Burma, it was snowing in Halifax. Little changes.