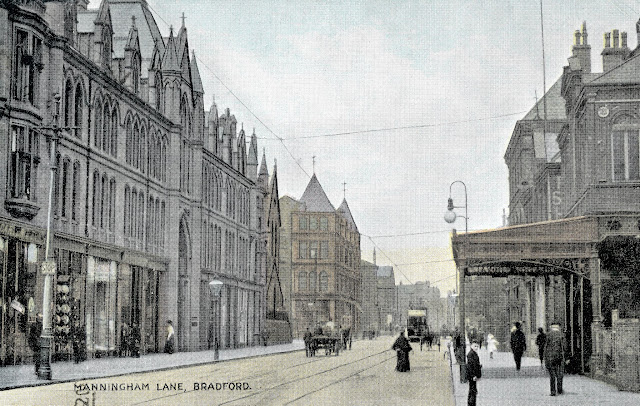 I took delivery of a newly acquired Edwardian picture postcard the other day - a view looking up Manningham Lane in Bradford. There was something rather familiar about the scene, especially the wrought iron canopy on the right of the photograph. After a little digging I discovered I had another old postcard featuring the same canopy and looking the other way - down Manningham Lane towards the city centre. 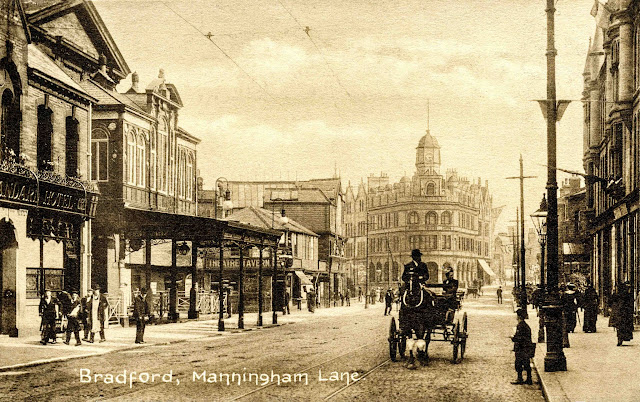 What I have finished up with, of course, is a kind of Edwardian Google Street View. This gave rise to the thought that if I can ever gather together enough old vintage postcards of West Yorkshire I can somehow stitch them all together to provide a dynamic bridge to the past.

I wrote about the original postcard (the second one displayed here) back in 2009 and the discovery of a second view of essentially the same buildings gives me an excuse to share the short description I first published seven years ago.

"I recently acquired a new postcard which shows Manningham Lane in Bradford in 1902. On the left of the Francis Frith card are the Royal Standard Hotel, the Theatre Royal, and the Theatre Tavern, all of which are now sadly gone. The grand building in the centre background was the Bradford office of the Yorkshire Penny Bank. The last time I checked - about a year ago - it was occupied by a bar called "Brass" which had, thank goodness, retained a fair amount of the internal decorations.

All the buildings in the foreground were still in existence until the 1980s and 90s when they either burnt down or were demolished to make way for a monstrous new inner ring road. The Royal Standard was originally built as a Turkish Bath which came to have its own licenced refreshment rooms. Eventually the refreshments superseded the bathing and it changed its name to the Royal Standard Hotel. Towards the end of its life the Royal Standard became a bit of a dive (the whole Manningham Lane area had fallen on hard times by then) and it was a regular haunt of Peter Sutcliffe, more famously known as The Yorkshire Ripper."
at July 20, 2016