Peas Bounce Off The Walls Of Marathon 50 Years Ago 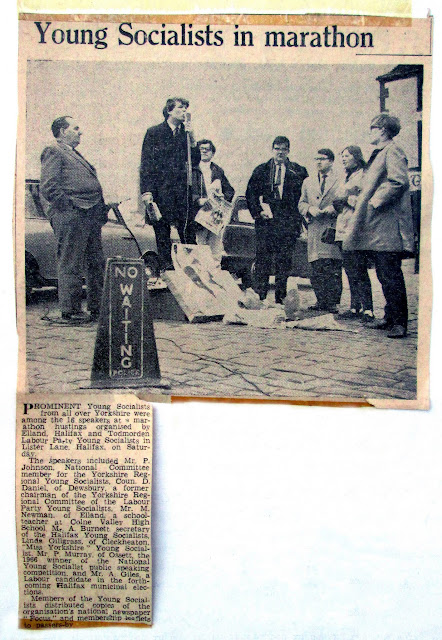 I have just received an email from my brother on the other side of the world containing a scan of an old press cutting which must date back fifty years. The young chap who is clinging the microphone like some semi-adolescent crooner is indeed myself, an age and a half ago. The rather stout chap to my left was Clifford Ward the Secretary and Agent of Halifax Labour Party and his research had led him top believe that an ancient public speaking pitch existed in the town centre (Halifax's equivalent of Speakers' Corner) which had been forgotten about for generations. It happened to be in the middle of a car park in Bull Green. The Young Socialists decided to exercise their right to speak to the citizens of the town so the police were called in to erect no parking signs and we set up our soapbox. As the newspaper reports, we organised speakers from all over Yorkshire and attempted to bring about the revolution by boring the people into submission.


I always recall Lenin once writing about the Russian revolution and saying, "Socialism bounced off the peasants like peas off a wall". It was a bit like that in Halifax fifty years ago. But we gathered around and listened to ourselves. And we lay down rich memories that could be excavated half a century later.
at July 29, 2016