Postcard Of The Week: Walter Has A Moan 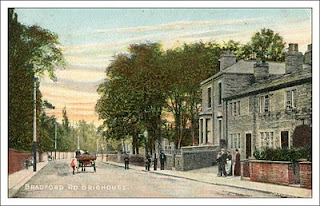 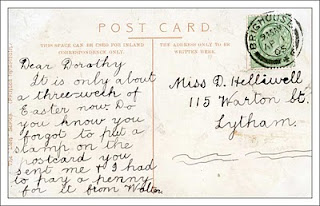 This week's postcard is another new acquisition. It is an early colour-tinted picture of Brighouse, which is just a couple of miles down the road from where I live. It was the local connection which attracted me to the card, but I was also quite taken for the message on the reverse which somehow seems to sum up the Yorkshire character. The card was sent in April 1905 by someone called Walter to Dorothy Helliwell (sweetheart, relative, friend ... who knows) who lived in Lytham, Lancashire. In typically laconic Yorkshire style, Walter points out that it is only three weeks to Easter and then complains that Dorothy's last card didn't have a stamp on it and he had been forced to pay a penny to receive it. Add to this penny the further halfpenny it cost Walter to send his terse billet-doux and it is clear that a Yorkshireman is always prepared to shed out his hard-earned brass for a good moan. 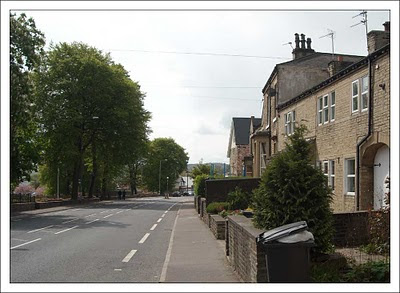 With postcards of local scenes I can never resist doing a "then-and-now" with them so yesterday I went in search of the exact spot the picture must have been taken from. It wasn't too difficult to find a hundred and five years down the line, the arched entryway and the distinctive bay windows provided useful locational clues. I couldn't manage to get a shot from exactly the same angle as the postcard as that would have entailed me standing in the middle of what is a busy main road. Who knows I might have got knocked down and that would have really have given me something to moan about.
at May 19, 2010