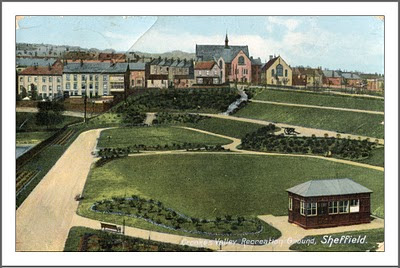 I was at an Antiques Centre on Saturday, sorting through a box of old postcards when I came across one I had to buy, almost irrespective of the cost. Luckily, it was only marked at £2.50 (about $3.80c) and so I managed to acquire it without having to raid the Holiday Penny Jar. The card features a picture of Crookes Valley Recreation Ground in Sheffield and the card was postally used in March 1909, so we can assume that the picture dates back to the very early years of the twentieth century. The reason why I had to buy the card is that it features a house that I used to live in (the second terraced house down to the right of the yellow chapel building towards the rear right of the picture). 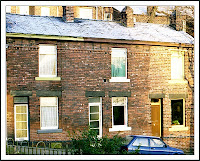 When I lived in the house in the 1980s the scene had changed little from the one above - although the cannon in the park was no longer there. Our house was the middle one of the three in the picture on the left, which I  took thirty years ago. We lived in the house whilst the Good Lady Wife was at Medical School in Sheffield (I was lecturing in nearby Doncaster at the time). But there is a second connection to that postcard picture in that if you search through that mass of terraced house roofs at the rear left of the postcard, you would be able to pick out the house where The Lad currently lives, whilst he is at Medical School in Sheffield. It is a postcard that nicely brings the family together. And as The Lad starts his Second Year exams today, it provides me with an excuse to wish him the very best of luck.
at May 04, 2010