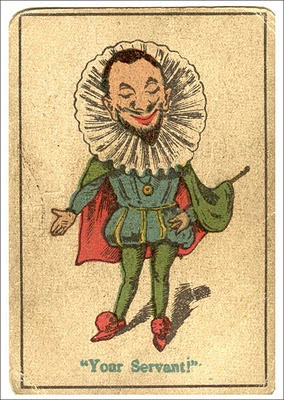 I came across a strange deck of Victorian cards this weekend, tucked away inside of a cigar case which, I think, my friend Janie gave me a few years ago. I have a feeling that she was giving me the cigar case and the cards were a bonus find. But what a find and what a game. That is both a comment and a question - what game could it be? In the set I have, there are 40 cards : 10 groups of four cards each. Each group has both a colour drawing and a descriptive title. Could this be an early form of "Happy Families" perhaps, or a kind of snap game? I have fed a few of the descriptions into Google and found just one hit : someone selling a similar set of Victorian cards (although not as complete) in New Zealand earlier this year. From the description, they had no idea what the game was called or how it was played either. 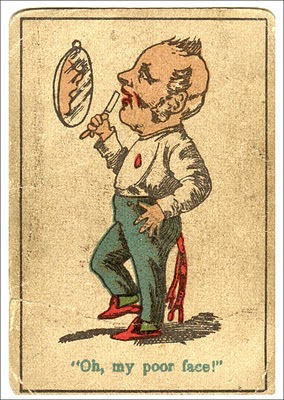 I can sympathise with the poor fellow with the cut face. I find this morning that it isn't my face which is covered with plasters, but my hands. The fine weather over the weekend brought about a rapid change of format to the party we had planned and in extra-quick time the lawn had to be mowed and the BBQ scrubbed. I finished up with blisters all over my hands which is an indication of, not how hard I worked, but how soft I have grown during my gentle decline into old age. 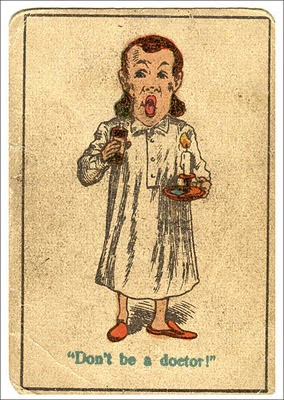 Part of the reason for the party was to celebrate The Lad (and his girlfriend Heather) having got through their second year exams. In a few days time they will start the practical training and then before the end of next month they will be going out on placement into the hospitals of South Yorkshire. Congratulations to both of them - and commiserations with the poor folk of South Yorkshire who could just possibly wake up in hospital and find The Lad gazing down at them and scratching his head in puzzled amusement.
at May 24, 2010