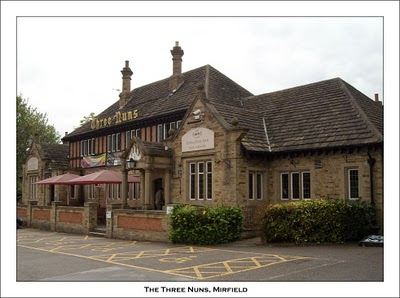 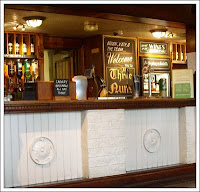 Step into the Three Nuns Inn near Mirfield and you step into a typical 1930s road-house. It is the kind of place that was built with motor coaches and charabancs in mind, a place of trilby hats and potted meat sandwiches. Or rather it was, when it was built seventy-odd years ago. These days it is a "family pub" with a heavy emphasis on food : fighting hard with Special Offers and Party Packages to fill those near cavernous paneled rooms. The great bar which faces you when you enter the pub remains long enough to serve a coach party on its way to Blackpool: but these days the holiday-makers have headed for Spain and the bar is an architectural feature rather than a retail necessity. 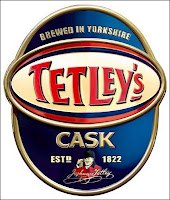 I stepped into the Three Nuns the other day and had a pint of Tetley's Cask beer. "Brewed in Yorkshire", the plaque on the beer pump proclaimed, "but not for long" I mumbled to myself as I took an appreciative sip of the smooth, hoppy beer. Carlsberg UK - the current owners of Tetley's - have announced that, as of next year, Tetley's Cask Ales will be brewed in Wolverhampton : and Wolverhampton is a very long way from Yorkshire. As tears of nostalgia dripped into my emptying pint glass, I glanced around the near-empty bar and marveled at the scale of it. It has been built in that mock-Tudor style that was popular with pub architects in the 1930s. You feel that you could have a decent game of real tennis in the room and nobody would notice and nobody would care. It might be plastic history, but it is history. And in many ways the Three Nuns has more than enough history to adequately fill all its' cavernous rooms. 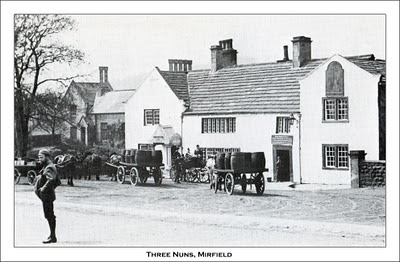 Whilst the new road-house was only built in 1939 it replaced an old Inn that was supposed to date back to the end of the fifteenth century (curse, curse and curse again whoever agreed to that particular bit of modernisation). It stands close to the site of Kirklees Priory and the old Inn was supposedly founded by three nuns - Katherine Grice, Joan Leverthorpe and Cecilia Topcliffe - who were forced out of the Priory when it was dissolved by Henry VIII in the 1530s. Legend states that Robin Hood died close to Kirklees Priory in the fourteenth century, having been poisoned by the Prioress there, and an old - and it must be said, fake, - gravestone can still be found in adjacent woods claiming to be final resting place of Robin Hood's .
Moving forward a few hundred years, Oliver Cromwell is reputed to have rested in the old Inn on his way to fight at the Battle of Marston Moor in 1644. Fast forward another couple of hundred years and you might have found the bar full of pipe-smoke, intrigue, and revolutionary sentiment, as the Inn was a favoured meeting place of Luddites as they drew up their demands for fair wages and their plans for direct action against mill owners. A few years later Charlotte Bronte would have known the Inn well : she was both a student and a teacher at Roe Head School, a few hundred yards away. Her biographer, Mrs Gaskell, mentions the Inn and wonders about its origins in her "Life of Charlotte Bronte". During the last century there were frequent tales of ghostly visits and haunted noises (which would have been much more fitting in the context of the old Inn rather than the new road-house) and these resulted in an exorcism being carried out in the pub in 1991. I may be a cynic, but I suspect that the exorcism was more about attracting visitors than discouraging ghosts.
Given the current state of British pubs and their empty bars and bankrupt landlords, a bit of company as you sip your beer is not a bad thing. The Three Nuns may not be a beautiful pub and it certainly isn't an old pub. But as a place where you can sit down and enjoy a quiet pint with Robin Hood, Maid Marion, Henry VIII, Charlotte Bronte, Mrs Gaskell and a bunch of Luddite revolutionaries - it is near unique.
at May 11, 2010