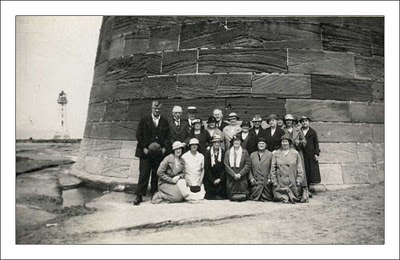 In a remarkable and uncharacteristic show of logical organisation, I have another photograph of Enoch Burnett this week. The photograph shows a party on what must have been an outing to the seaside. I suspect that it was taken in the 1930s as Enoch died in 1948 and I can't see that there would have been spare fuel to take people to the seaside during the war. Maybe it was a charabanc trip from the local chapel in Bradford, maybe it was a pub outing : nobody knows and fewer care. I am able to identify my grandparents thanks to a penciled inscription on the back and I have marked them on this following enlargement.

Who the rest are, I don't know. A more interesting question is where was the photograph taken. The large building in the foreground looked too substantial to be another lighthouse and the angle of the curve wasn't quite right. After gazing at the building for a while I suddenly thought I recognised it from seaside trips of my own as a young lad. I checked a number of photographs on-line and I am now certain that the original photograph was taken in New Brighton, just across the River Mersey from the port of Liverpool. You can make out the same massive stone walls and the same relationship with the lighthouse in this modern photograph.
Both the old fort and the lighthouse are still standing. According to what I have been able to discover, the old fort is used as an occasional rock concert venue whilst the lighthouse can be hired as a place for newly-weds to spend their wedding night! Quite what Enoch and Harriet-Ellen would have made of all that I can't imagine.
at May 22, 2010