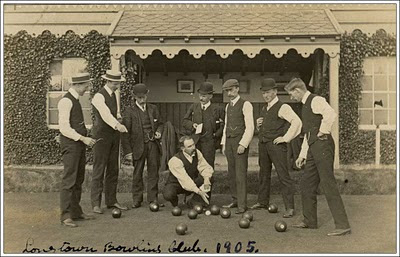 I am leaving Enoch Burnett behind and switching to my mothers' family : the Beanlands. And my photograph this week probably - and I stress the probably - features Fowler Beanland, my mothers' uncle. You will already be familiar with Fowler as he was the postcard collector and it is his collection dating back to the first decade of the twentieth century which now forms the bulk of my collection. This particular photograph was amongst the postcards I acquired from my mother. We know that Fowler was a keen bowler and also that he lived in Longtown, Cumbria, so there is a good chance that Fowler is one of eight men in this splendid photograph.. But which is Fowler?
Fowler was born in June 1872 and therefore would have been thirty-three when the photograph was taken. I have searched the faces looking for some family resemblance, but there is nothing obvious. Is that a familiar smile on the face of the man on the left? Is that a Beanland profile on the right? The more I look, the less certain I become. I did meet Fowler when I was very young - he died when I was eleven - but by then he was very old and I was too busy leafing through his postcard album to pay any attention to the man himself. 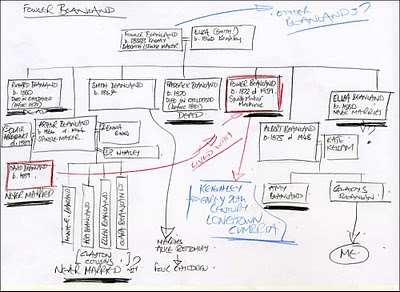 He never married and lived the last thirty or so years of his life with his nephew David. I have begun to sketch out the complex relationships of the Beanlands : the amazing thing was how such large Victorian families were pared down to size by a combination of childhood deaths and a strange antipathy to marriage and parenthood. You might be as well cutting out and keeping the above diagram - I have a feeling I will be coming back to it.