When Father Says Turn, We All Turn. 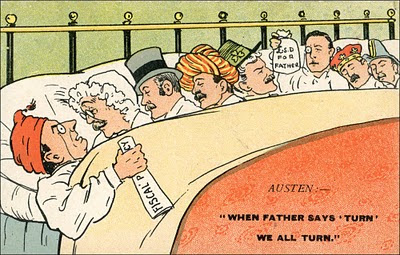 It is 9.30 in the morning and as we were up watching the election results until 4.00am you mustn't expect too keen an analysis of what has happened at this stage. Equally, as nobody seems to know what has happened, you must not turn to me in the hope of enlightenment. However, a number of people from around the world have been asking me questions about the rather quaint British electoral system, and the following questions and answers are my contribution to the cesspool of human misunderstanding.
Who has won the British General Election? I have no idea and neither does anyone else. At this precise moment the Conservative Party have 290 Parliamentary seats, the Labour Party 247, the Liberal Democrats 51, and others (the kind of political equivalent of a packet of Bassetts Liquorice Allsorts) 27. There are 34 seats still to declare, but the predications are that no party will have an overall majority.
What is a Hung Parliament? A House of Commons where no single political party can command a majority of votes against all others. Hung Parliaments are rare in the British political system (the last one which immediately followed an election was in 1974) because the voting system - first past the post rather than proportional representation - favours the two "main" parties, the Conservatives and Labour.
What will happen now?  The British Constitution is always difficult to interpret because it doesn't exist - it is merely a collection of precedents and traditions - but the sitting Prime Minister need only offer his resignation if he cannot command a majority in the House and consequently loses a vote of confidence. Gordon Brown may well try to stay in office by seeking either a formal or an informal deal with some of the smaller political groupings in order to avoid losing such a vote. There again, he my fall on his sword and the tradition then calls for the Queen to send for someone else to try and form a Government.  The whole system is very antiquated and unclear and may (or may not) conclude with someone kissing her hand and becoming Prime Minister.
Will there be another General Election? The answer almost certainly is "yes" but there will be an attempt first of all for someone to try and govern as a minority government. They will remain in power until they lose that first critical vote and then that particular Government will fall. Even then, the Queen could ask someone else to try and form a Government, but sooner or later there will be another General Election, probably before the year is out.
Will the next election be under a new electoral system?  Unlikely. There is growing support for movement towards electoral reform but it is unlikely that a major change to electoral practices could be agreed upon in the time available and with the current balanced state of the parties. The Conservatives remain skeptical about electoral reform, although the main defense of the current system - it means you get majority governments - seems to have evaporated before our eyes.
Why do the British vote on Thursdays?  No reason other than tradition. And like many traditions it does not stretch back to time immemorial, but simply to the 1930s. There is likely to be a strong movement for change to electoral practices following this election after chaotic scenes at a number of polling stations and confusion over the precise meaning of electoral law.
Why have people voted the way they have? I don't have any greater insight than anyone else, but my guess is that there is a genuine desire for confusion out there. The political system has been shaken up and following all the scandals and disillusionment, this is what many people wanted. And, in a sense, this has been a triumph for politics in that for the first time in years people are talking about politics again. The voter turn-out yesterday is likely to be significantly up on recent years and that could easily be carried forward to a second election. If nothing else, that isn't a bad result.
The illustration is of a vintage postcard I bought the other day which dates back to 1906. The rather nice thing about it is that you can interpret it in any way you want to.
at May 07, 2010