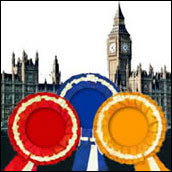 As I think I said on the Theme Thursday Blog : Cometh the day, cometh the colour. (OK, I didn't get the spelling right on the Theme Thursday Blog, but you know what I mean). It is election day here in the UK and the British political scene is still colour-coded (do political parties in other countries have tribal colours they are identified by?). The colour for the Labour Party used to be red, but over the years it has increasingly become pink-tinted. During my very (very) brief political career, bright red was still  in fashion and I have managed to dig-out one of my old election leaflets - yes that is me in the top picture! If I recall rightly, about 121 citizens of North Ward voted for me and I was not elected (it has to be said that it was probably the most Conservative - the most blue - ward in London). Looking back at the leaflet I am not sure whether the most embarrassing aspect is the dreadful photograph or the claim that I was "deeply concerned with the housing problems of young married people" 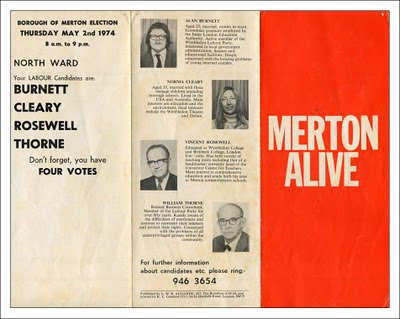 Unlike most of the gutter press, I will not presume to tell readers how they should vote. They can, if they so desire, be pinky-red or yellow (or blue if they really insist on it). I know how I will vote. As I walk into the polling station I will be singing that old hymn to myself : "Change and decay in all around I see, O thou who changest not, abide with me"
at May 06, 2010