Postcard Of The Week : The Flying Dutchman 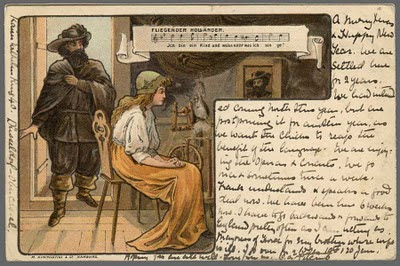 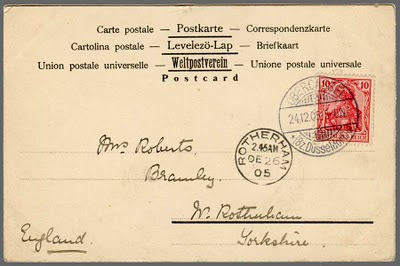 My postcard of the week is a curious thing for a whole variety of reasons. Posted in Dusseldorf, Germany in December 1905, it was addressed - and presumably delivered - to the sparingly described Mrs Roberts of Bramley, Near Rotherham, Yorkshire. The message, as best as I can make it out, is as follows :
"Kaiser Wilhelm Ring 40, Dusseldorf, Obercassel.

A Merry Xmas & Happy New Year. We are settled here for 2 years. We had intended coming north this year, but are postponing it for another year, as we want the children to reap the benefit of the language. We are enjoying the Operas & Concerts. We go once, and sometimes twice a week. Frank understands and speaks a good deal now We have been here 6 weeks now. I have to go backwards and forwards to England pretty often as I am acting Mayoress of (Thorne?) for my brother whose wife is ill. I go over for 2 balls 19th / 20th Jan. Hoping you are all well. Love from us. J A Tilcomb"

And so to the questions. Who was J A Tilcomb and what was she - and presumably her family - doing in Germany in 1905. It would appear that the education of the children rather than employment was a prime factor in the location of the family which heavily hints at some form of independent financial means. The fact that JAT's brother was Mayor of a town (the best interpretation I can make is Thorne which is a town in Yorkshire about ten miles or so away from Rotherham) also suggests a certain social position. The ability to frequently return to England for balls as part of her duties as Acting Mayoress probably means that money is not a major issue. The address that the Tilcombs were staying at seems to be Kaiser Wilhelm Ring 40, Dusseldorf, and if this is the case, the building is still standing and, from what I can see from Google Earth, it is a very substantial residence. But perhaps the most intriguing question is what happened to Frank (the son of the family?) : a young man, fluent in German. Ten years later - in 1915 - where did he find himself? So many questions, so many stories.
at May 27, 2010