Sepia Saturday 97 : On Excelsior - Nothing Changes 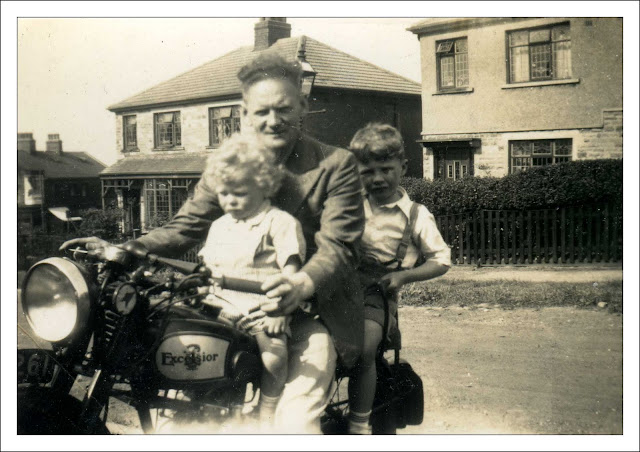 I am a "themer" for this weeks' Sepia Saturday (Sepia Saturday 97) : I have children, I have one of them who is "looking up", and I have a motorbike. All right, if you are into nit-picking and point-scoring, there wasn't a motorbike on the prompt image, but believe me, it was just off-camera (I choose the images, I should know). Anyway, I have my father, Albert Burnett, my brother Roger perched on the back - and that angelic looking fellow at the front is ... well you know who it is. 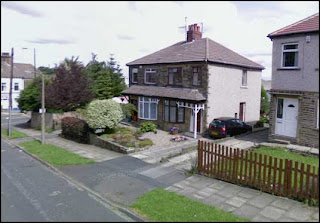 The picture must have been taken in about 1950 and it was taken just outside our house in Southmere Drive, Bradford. Looking at the same scene now (with the aid of Google Street Cam), not all that much has changed. The leaded windows have gone and the doors may be a little smarter, but the buildings are the same. But the 60 years has had a greater impact on the three people. My father died almost ten years ago, but the other two are still going strong : Roger in Dominica and the young angelic one still in West Yorkshire. 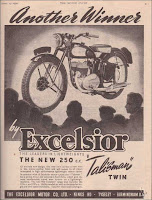 The Excelsior Motor Company was the first to go : it went out of business in 1965. The company started life in 1874 as Bayliss, Thomas and Co and they were manufacturers of penny-farthing bikes. Later they made and sold ordinary bicycles and by 1914 they were manufacturing motor-bicycles from their base in Tyseley in Birmingham. I am sure there are people out there who will be able to recognise the precise model of bike we are all sat upon : my best guess is that it was a Talisman Twin. If this is the case it must have been brand new in 1949/50 and this, perhaps, explains why my father is showing it off with such pride. My brother is striking a certain attitude whereas I am sitting there quiet and angelic. Nothing changes.