Sepia Saturday 98 : A Charabanc To The Centenary 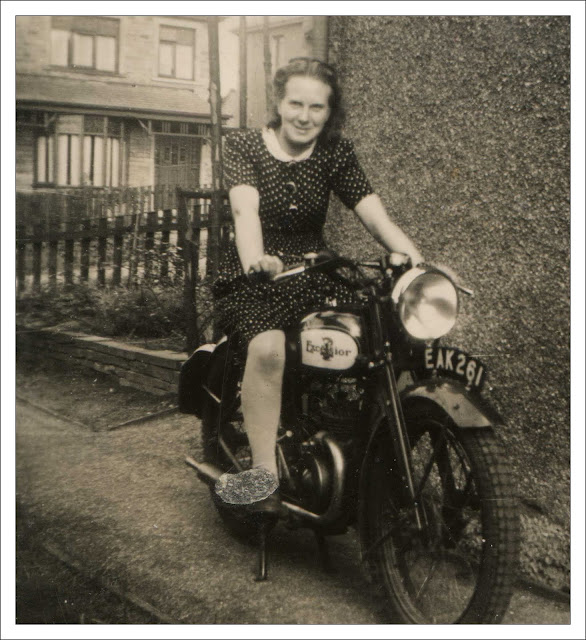 Over on Sepia Saturday we are travelling towards the grand celebrations that will mark Sepia Saturday 100 (12 November 2011). The suggested method of transportation this week is by bus, but my mother, Gladys Burnett, seems to have missed the bus and therefore she has climbed on my fathers' motorbike (yes, it is the same one I featured in my last Sepia Saturday post). Whilst she was a frequent passenger, my mother never was a driver : even when my parents had a tandem she was more the rear motive power rather than the forward navigator. If you followed the comments on my post last week, you will know that the bike was a 1946 Excelsior 125cc Model O and not the Talisman Twin I suggested. 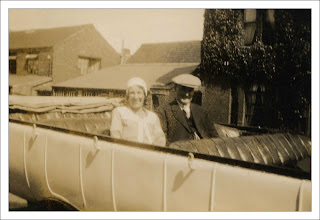 Whilst my mother appears to have missed the bus, her father looks as though he caught it (at least I think that is her father, Albert Beanland, but I have no idea who he is sat next to). He and his mystery companion (it looks nothing like his wife, Kate Kellam) appear to be having a grand day out in a charabanc - the precursor to the modern day motor coach. With their fine leather trim and row after row of seats, such things were grand affairs, and I an surprised that nobody has thought of re-introducing them into this twenty-first century world that we inhabit. In the 1920s and early 1930s, they would be used to transport groups to the English seaside resorts and they would frequently stop at wayside pubs for refreshments. That is the way to travel - whether it is to bracing Blackpool, or the Sepia Saturday Centenary Celebrations.

SEE ALL THE OTHER POSTS THAT ARE TAKING PART IN SEPIA SATURDAY 98 AND READ ALL ABOUT THE SS100 CELEBRATIONS AT THE SEPIA SATURDAY BLOG.
at October 29, 2011