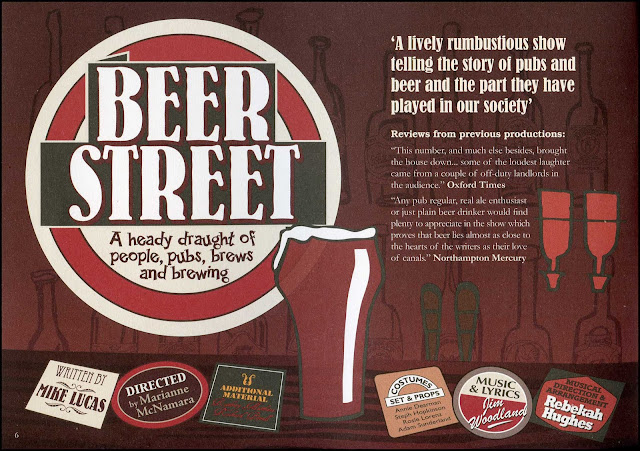 We went to the theatre on Saturday evening : to the Marsden Mechanics Hall to see the splendid Mikron Theatre Company present the last night of their musical "Beer Street". It was written by my friend and fellow Old Gits Luncheon Club member, Mike Lucas. Whilst he was updating the play earlier this year I was able to lend my help and support during the necessary research which underpins such a project. This involved visiting public houses and tasting beer, inter-spaced with talking to brewers and landlords about their trade. : onerous tasks, but someone has to do it in the interests of artistic integrity. Saturday's performance was a memorable evening and a triumph for the actors, writers and directors.

It is sometimes difficult to fully appreciate the poetry of beer. To give you a flavour (a little hoppy but not too powerful) perhaps I can quote from the lyrics of one of the numbers from the show. It sings the praises of many of the grand old ales that have now sadly vanished from pubs and bars across the land, beers with wonderfully evocative names. However, it is not merely a nostalgia trip because at the same time it celebrates the birth of new flavours and new names.

"The winds of change have blown
over Joules beers of Stone,
Oldham Bitter and Ely Brown Ale,
Websters Lifeboat Ale
And St Neot's Paine.
But new flavours grow
Among the old ones that remain.

It was wonderful stuff and it was enjoyed, of course, with a pint of ale in my hand. Sadly,  Saturday night marked the end of the 2011 Mikron season and whilst next year they will be touring the country again, it will be with a different set of shows. But, who knows, Beer Street might be revived again in a year or two : and with this in mind I will continue to help Mike keep up to date with his research.
at October 25, 2011