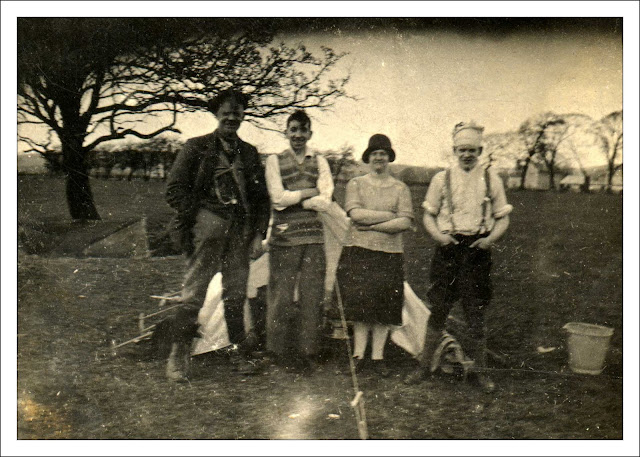 This is one of those rare pictures with an inscription on the reverse. The inscription must be authentic because it is in my rather childish handwriting - "Them Were The Days - At Camp : Left to Right - Grandad Burnett. Monkey Matthews, Auntie Miriam, Dad". So we thus have the dramatis personae, we have a location, which is probably a West Yorkshire field, and we have a date which must have been the late 1920s. By then, Enoch "Grandad" Burnett would have been around 50 years old, Miriam would have been in her late 20s and Albert, my father, would have been in his late teens. As for Monkey Matthews, I have no idea!

My mind plays with the idea of Auntie Miriam eloping with Monkey Matthews who takes her to live in a tent in a field (complete with hot and cold running bucket). Enoch, accompanied by my father, goes in search of the love-lost pair, riding through the rural streets of West Yorkshire in his window cleaners' donkey and cart. Once found my father challenges Monkey Matthews to a fight in defense of his sisters' honour, but cuts his head when he trips over a guy rope. Things get worse when the donkey drops dead and the back wheels fall off Enoch's cart. But Miriam makes everyone a cup of tea and they all line up for a celebratory snapshot. Mystery solved. Questions answered.

But who took the photograph? And whatever happened to Monkey Matthews?

You will find many other questions based on many other old images by following the links on the Sepia Saturday Blog.