A Prince Among Bowlers 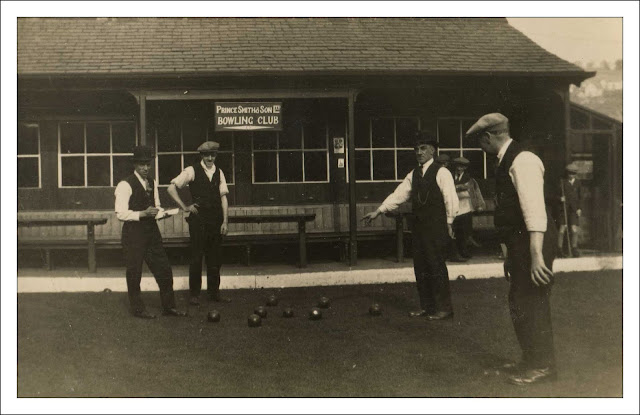 I was intending to go out today as the sun is shining, but my back seems to have gone, leaving me walking around like a rusted-up half-opened pen-knife. I can't blame it on my recent indulgence in sporting activity as the crown green bowling season is now over and I am left to send virtual woods thumb-pegging towards imaginary jacks as I contemplate the morning frost on the lawn. But as it is a virtual game I am playing let us imagine that it is on the green on Prince Smith and Sons' Bowling Club in Keighley. One of the men is possibly my Great Uncle Fowler Beanland (the photograph comes from his collection and he was a keen and competent bowler), but as our backs are bad let us limit ourselves to a gentle stroll around the image.

The most obvious thing to note first of all is the location - Prince Smith and Son. Prince Smith and Son (it became Prince Smith and Stells in 1939) was one of the foremost manufacturers of wool-combing, drawing and spinning machines in Europe. In the mid 1920s (perhaps 15 or so years after the photograph was taken) it employed 2,000 workers in the town of Keighley in West Yorkshire. The firm was started in the first half of the 19th century by one Prince Smith, the son of a Keighley clock-maker, William Smith. 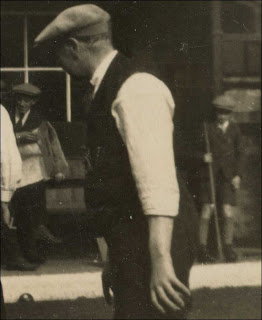 The 19th century idea of using "Prince" as a christian name seems to have died out, but if you are destined for nobility there is nothing like planning for success. Prince Smith's son was duly named Prince Prince-Smith and by 1911 had amassed enough of a fortune to acquire a Baronetcy in the New Years' Honours. At the time a Baronetcy was often a reward for political donations and the recipient were addressed in the style of a Knight - thus Sir Prince Prince-Smith.

Let us leave aside the arcane and somewhat bizarre world of the British aristocracy and return to the photograph and, in particular, to the young lad on the right hand side who seems to be holding some kind of ling stick. I can't imagine what this can be : one is tempted to think it might be some kind of measuring rod, but crown green bowlers measure in 16ths of an inch not in feet and yards. Perhaps it is some kind of broom for sweeping the surface of the green, but I have never heard of such an arrangement. I have a couple of friends who are experts at the game so I must remember to ask them what the implement might be.

And then there is the two small pictures that seem to have been pinned up on the outside wall of the Club House. Maybe they are indeed Edwardian pin-ups and one is left to curse the limits of a scanners' ability to improve detail. The lower of the two pictures seems to be a somewhat boring picture of someone quite grand : perhaps it is Prince Smith himself (father of Sir Prince Prince Smith) as he was highly thought of in the town and had a clock-tower erected in his memory. The two figures in the top picture look far more interesting. Perhaps they were Music Hall beauties of their time : possibly the Lady GaGa's of the Edwardian world. But these were gentle times, an age of respect and reverence : so perhaps it is simply a picture of Dame Ann Prince-Smith and her sister. By now I know never to be surprised by the ingenuity of my fellow lovers of old images and I confidently expect a copy of the original image to appear in my in-box within the next few hours. 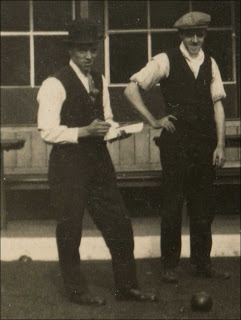 Perhaps I can bring this virtual game of bowls to a close by offering irrefutable proof of my own participation in this particular match. Look to the left of the fine bowler-hatted gent who is keeping the score. There you will see a half-hidden bowl which is in the channel or gutter. As those who have ever been involved in a game of bowls with me will know this is proof-positive of my presence. Whilst other bowlers have to try and identify their woods by their discreet colour patches, I never have such a problem : I simply head straight for the channel and pick mine out. Of course the channel is that little bit deeper and I need to bend down that little bit more to retrieve my woods. Which, of course, is why my back has gone.
at October 20, 2011