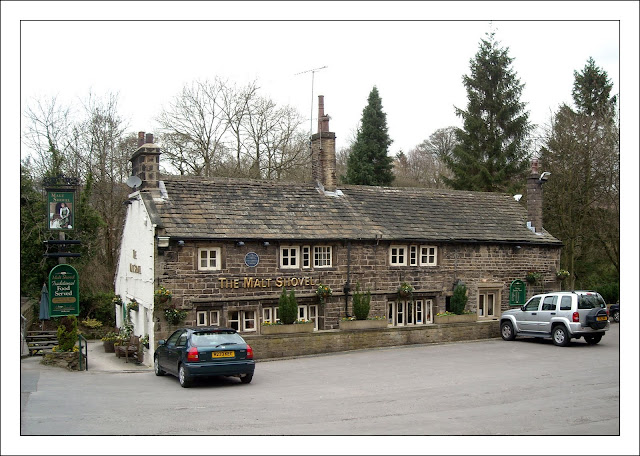 On the moors above Harden, a few miles north-west of Bradford, there is supposed to be an ancient stone circle. There are also some prehistoric earthworks. General Fairfax camped his Civil War army in the fields just up the road, and the Bronte family lived only a few miles away. The whole area seems seeped in history and - like fruit that has been left soaking in a bowl of brandy - the buildings radiate a pungent warmth. Well, the Malt Shovel Inn certainly does. 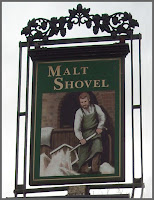 The Malt Shovel is old : possibly seventeenth century, nobody seems to know.  It used to be owned by the de Ferrand family, but when their estate was broken up in 1919 the pub was sold for £1,476 : a decent sum back in those days and only a few pounds less than the price fetched by Harden Hall itself. Like so many country pubs, it has also served as a courtroom, an auction house and even a prison. There are surely worse places to be incarcerated.

Inside it is long and low : the way pubs should be. Real beams hold up a real ceiling and a hand-pump on the bar pulls real ale. I called in at lunch-time - it is rare these days to find a pub open at lunchtime - and soaked up some of the atmosphere, some of the history, and some of the Tetley Bitter. A little white dog came and sat under the table : didn't disturb me, just sat there as though it was part of the fixtures and fittings. A lovely Yorkshire pub, a visit to which makes the day worth living. What more can you ask for?
at November 29, 2011