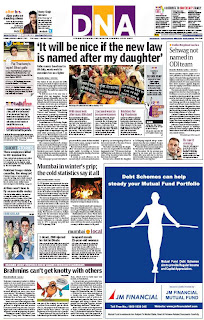 I have to admit, I am a newspaper junkie. If eyes are a window to the soul, then a daily newspaper is a window to the soul of a nation. Whenever I am on holiday I will seek out the local newspaper and devour it like a big bad wolf devouring a chicken nugget. If it is written in English, so much the better, otherwise I will look at the pictures and try to guess what the story might be about from the slightest of clues.


My love of newspapers is not based on the physical properties of paper and ink. Whilst I will admit that there is a decent argument for choosing fine leather-bound books rather than their digital, electronic cousins, it would be a perverse fellow who was drawn to the arm-arching broadsheet or the ink-dripping tabloid. So you might think that I would be a fan of electronic news sites or tablet versions of existing newspapers. This, however, is not the case. There is something about the layout of the traditional newspaper - the jumble of words and images, the multitude of columns - which is not replicated in on-line news sites. 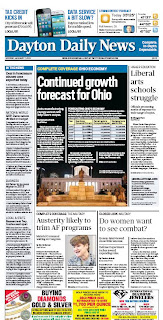 And so after experimenting with everything from Kindle newspapers to news aggregators, from iPad editions to Google Reader, I have returned to my first love, the service provided by PressDisplay.com. Be warned, subscriptions are not cheap, but fixes seldom are for us addicts. Press Display gives its' subscribers unlimited access to something like 2,000 newspapers worldwide. You can read a different newspaper every day for the rest of your life (well almost), travel the world without leaving your armchair, catch up with events in Mumbai, are scan the obituaries in Dayton, Ohio.

I could go on about the advantages of PressDisplay, but it will begin to sound like an advert, and, whatever you might think, I am not being paid by them to write this. The purpose of this post is merely to point out the service to any other addicts there might be out there, and to give a Yorkshireman's nod of approval to the company providing the product. The other point of this post is to share with you something I was reading in the Mumbai edition of the Indian newspaper, Daily News and Analysis (DNA), this morning. Did you know that 7 people will killed by leopards in India last year? Now, that is interesting, isn't it?
at January 10, 2013