Sepia Saturday 160 : At Peace With The Parrots 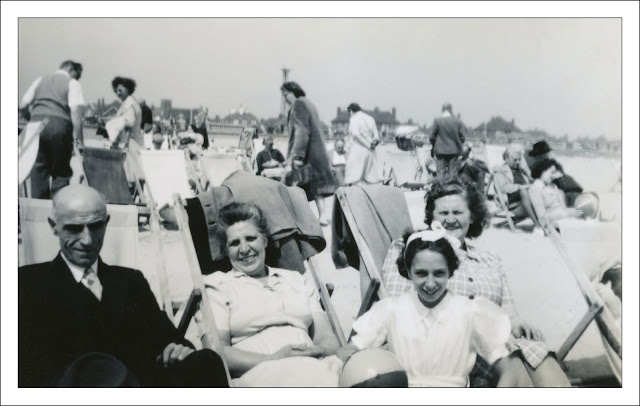 I am on the beach again this week for Sepia Saturday, although the focus of attention is not just on those in the forefront of the photograph. The possible themes for SS160 include what is going on in the background of pictures and people facing in different directions. My chosen photograph comes from the collection of my Uncle Frank Fieldhouse : and yes, the good news for all of her many fans from around the world, is that it features Auntie Miriam (front, right behind the girl with the big bow in her hair). 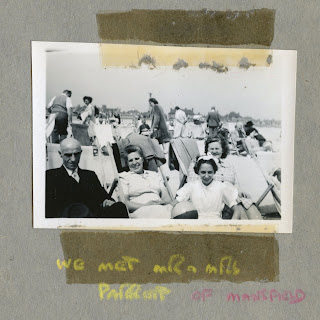 Being one of Uncle Frank's photographs, I have a mass of information about it. The album page is headed "We went a few times to Caister On Sea but it is only a small place" and it is dated July-Aug 1948.  As you can see, whilst they were at Caister they met Mr and Mrs Parrot from Mansfield - and one assumes the little parakeet with a bow in her hair. The original photograph is only 3 inch by 2 inch, but a good scanner can bring out so much detail from a photograph.

Look at Mr Parrot with his bowler hat, the very picture of a bank clerk or a public drains inspector on holiday. Look at the thick coats slung over the back of the deck chairs, protection against that wind blowing in from the North Sea I spoke about last week. 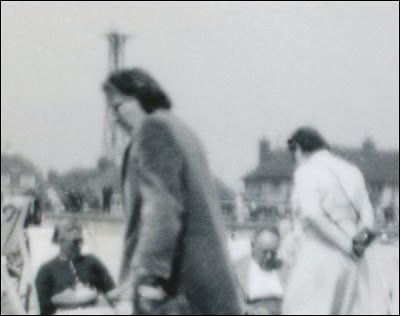 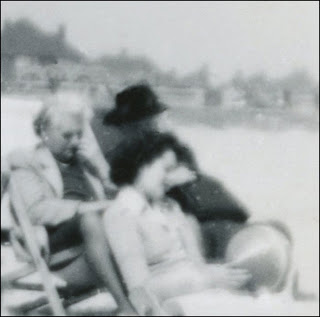 It all looks so long ago, another time in history, so long before we came into this modern world. But the Frankian precision of the dates allows me to say that, just as this photograph was being taken, a young lad was coming into this world in a grim mill town, some hundred miles to the north of here. One day that young lad would browse through the dusty albums his Uncle Frank left him and wonder to himself, what was going on in this photograph?

You can see how other people from all around the world are interpreting this weeks' Sepia Saturday theme image by going along to the Sepia Saturday Blog and following the links.
at January 19, 2013