Enoch And The Boers 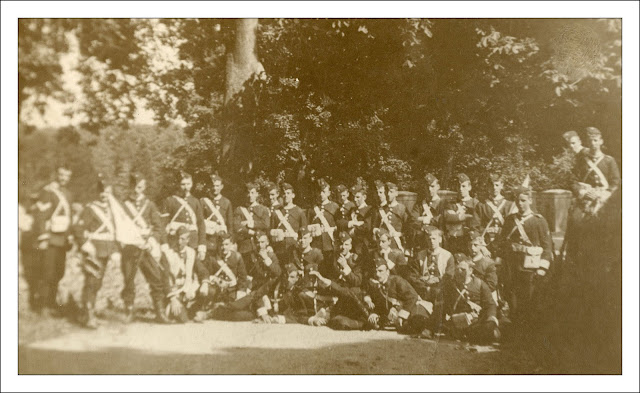 I don't have all that many military pictures in my family collection. The two great fountain-heads of my collection of old photographs - my father and my mothers' Uncle Fowler - were both machine fitters and held back in reserved occupations during the great conflicts of the twentieth century. But I do have a couple of intriguing photographs which almost appear to be from an earlier age. 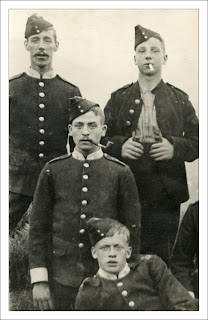 My main photograph is so faded and out of focus that it is impossible to make out any detail on the uniforms or the flag. It is, however, in the family collection and, as I am the first annoying curator of that collection to add "outside" photographs, it is likely to feature a family member. I have always wondered whether it included my grandfather, Enoch Burnett, and was of a training company of volunteers around the time of the Boer Wars.

The second photograph is much clearer and it would seem that the uniforms are the same. The young chap at the bottom of the picture looks remarkably like my father in his youth, but the dates would all be wrong. I therefore wonder if it is, in fact, his father, Enoch. I have no other pictures of Enoch as a young man and therefore I have nothing to compare it with. Enoch was born in 1878 and therefore he would have been 21 at the time of the Second Boer War. By the time the First World War came around he was in his late 30s, and, as my final picture shows, looking much older than the youth in the photograph. 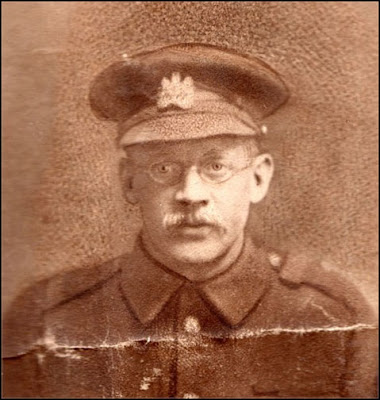 So my fourth - or is it my fifth - year of Sepia Saturday starts off with a mystery, which is perfect, because that is what old photographs are all about: mysteries wrapped up in enigmas and printed in a faded sepia tint. Happy 2013 to all my fellow Sepians.

You can get 2013 off to a sepia start by following all the links on the Sepia Saturday Blog
at January 05, 2013