A Pint With Squire Chucklehead 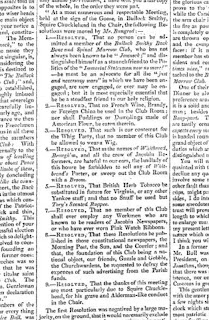 An occasional series in which we dig back through the columns of old newspapers in search of new insights.

From The Liverpool Mercury, January 1st 1813:
A notice appeared relating to the supposed inaugural meeting of the Bullock Smithy Back Bone And Spinal Marrow Club, which was a Society of High Conservatives dedicated to the politics of "the Immortal Statesman now no more" (William Pitt the Younger) and opposed to all things radical and liberal. The resolutions underline the hatred of the French, the Americans and the Whig (Liberal) Party. A "Jannock" was a "pleasant, outspoken, honest and generous person" and the Whitbread referred to was Samuel Whitbread II, the heir to the brewing fortune who, at the time, was the leader of the Whig Party in the House of Commons. The notice appeared not only in the national newspapers referred to in Resolution 7 but also in a number of regional newspapers such as the Liverpool Mercury. 1813 was a year which saw Britain at war with not only France, but the United States as well.

"At a most numerous and respectable Meeting, held at the sign of the Goose, in Bullock Smithy, Squire Chucklehead in the chair, the following Resolutions were moved by Mr. Bungrod :—.

1. Resolved, That no person can be admitted a member of the Bullock Smithy Back Bone and Spinal Marrow Club,, who has not always been known to be 'Jannock,' and distinguished himself as a staunch friend to the politics of the ' Immortal Statesman now no more !'—he must be an advocate for all the 'just and necessary wars' in which we have been engaged, are now engaged, or ever may be engaged; but it is most especially essential that he be a steadfast '. friend to our holy religion.
2. Resolved, That no French wine, brandy or foreign china be used in the club-room; nor shall puddings or dumplings made of American flour, be eaten therein.
3. Resolved, That such is our contempt for the Whig party, that no member of this Club be allowed to wear a wig.
4. Resolved, That as the names of Whitbread, Brough'm, and all the crew of Jacobin reformers, are hateful to our ears, the landlady of this house be forbidden to sell any of Whitbread's porter, or sweep out the club-room with a broom.
5. Resolved, That British herb tobacco be substituted in future for Virginia, or any other Yankee stuff; and that no snuff be used but Tory's scented rappee.
6. Resolved, That no member of this Club shall ever employ any workmen who are known to be, readers of Jacobin newspapers, or who have ever worn pink watch-ribbons.
7. Resolved, That these Resolutions be published in those constitutional newspapers, the Morning Post, the Sun, and the Courier; and that, the foundation of this Club being a national object, our friends Guzzle and Gobble, the churchwardens, be requested to defray the expenses of such advertising from the parish funds.
8. Resolved, That the thanks of this meeting are most particularly due to Squire Chucklehead, for his grave and alderman-like conduct in the chair." 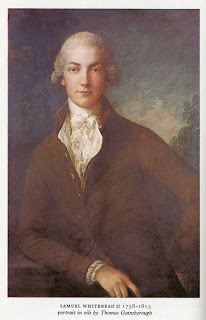 Samuel Whitbread was an interesting character (all brewers tend to be interesting characters!) He was the son of the founder of the great London brewery, Samuel Whitbread & Sons, who, unlike his father, was born into fortune and privilege. But just as the self-made elder Whitbread was a staunch Tory, the Eton educated son was a radical, a liberal and a supporter of the French revolution and the American colonists. During the Napoleonic wars with France, Whitbread constantly supported the cause of peace and was devastated when Napoleon was defeated and abdicated.

He fell into a deep depression, one which could not be cured even by his fine beer and porter. In 1815 he took his own life. Squire Chucklehead will have survived, of course : knaves and fools often do.
at January 03, 2013