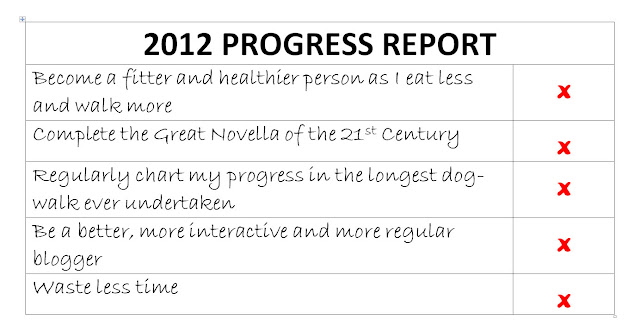 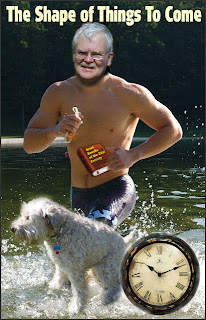 Last January I started the new year off with a list of resolutions and a promise that I would return to them before the end of the year. As one of the resolutions was to become "a better, more interactive and more regular blogger", it is a good indication of my overall lack of success that I only managed to return to the list after the end of the year. Better late than never, however, so here is the progress report.

1. Become a fitter and healthier person ... : It would be nice to award myself a tick, but although I am not particularly fit nor robustly healthy, at least I am honest. Amy and I have walked less than in previous years (blame the rain) and I have managed to avoid practically all healthy vegetables for the full twelve months (blame the taste).
2. Complete the Great Novella of the 21st Century .... It is still not finished although it has now clocked up some 85,000 words. At the moment and unless I can get down to serious business in the bright dawn of the New Year, it looks like the "Great Nevella of the 21st Century"
3. Regularly chart my progress in the longest dog-walk ever ..... Total failure on this score as Amy and I have made little progress in our northerly trek up the West Coast of the USA. However, the Lad and I are busy planning a real-time trip to the West Coast which hopefully will take place this summer which will be some recompense for the lack of virtual movement (for me, if not for Amy).
4. Be a better, more interactive and more regular blogger ..... No further comment is necessary.
5. Waste less time ..... In retrospect, I am going to withdraw this resolution on the grounds that it was ill-conceived, deeply flawed, and counter-productive. After considerable thought, I have decided that wasting time is the very objective of my life. Therefore, at one minute past midnight on the 1st January 2013, I raise my glass of Milltown Brewery's "Maltissimo" and propose the toast "2013 - The Year Of Wasted Time"
at January 01, 2013