Random Times :The Price Of Coal And An Oxydised Silver Electric Fire

This week, our random time machine is taking is back 82 years to the 16th August 1934, and it has come down to land in Derby in the North Midlands. Our cuttings are taken from the Late Final Edition of the Derby Evening Telegraph. To put local events in context, in Germany, President Hindenburg died and was replaced as Head of State by Adolph Hitler (who had been Chancellor since the previous year), in America the bank robber John Dillinger was shot dead, and the British Government published plans for a substantial expansion in the Royal Air Force. 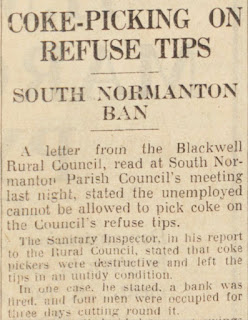 COKE-PICKING ON REFUSE TIPS
SOUTH NORMANTON BAN
A letter from the Blackwell Rural Council, read at South Normanton Parish Council's meeting last night, stated the unemployed cannot be allowed to pick coke on the Council's refuse tips.
The sanitary Inspector, in his report to the Rural Council, stated that coke pickers were destructive and left the tips in an untidy condition.
In one case, he stated, a bank was fired and four men were occupied for three days cutting round it.

The unemployment rate in the UK in 1934 was still over 16% and in mining areas such as South Normanton, it will have been much higher. And life upon the meagre benefits that were available was very hard indeed. The dreaded means-test was still in operation, so in order to get what benefits there were, families had to undergo a rigorous and demeaning investigation into what resources and possessions they still had. Searching tips and spoil heaps for coke and coal waste that could still be used was the only means many families had of providing some heating for the coming winter. The decision by the Council to ban such activities because they made the tip "untidy" is a powerful reflection of the state of society after four years of the Great Depression. The bank that "was fired" was not - some may say alas - a financial institution, but a bank of rubbish in the local tip. 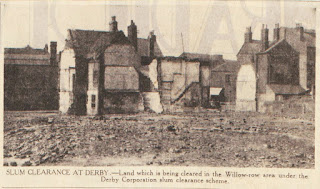 SLUM CLEARANCE AT DERBY
Land which is being cleared in the Willows Row area under the Derby Corporation slum clearance scheme.

The slogan at the end of the Great War was the need to construct "homes fit for heroes". In August 1934 it was announced that 2.3 million new homes had been built in the UK since 1918, but poor housing was still an issue and the slums wouldn't finally begin to go until after the Second World War. In 2016 another new housing development is taking place in Willow Row, replacing the development that was built on the newly cleared land in 1934. 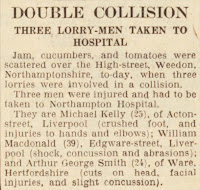 DOUBLE COLLISION
THREE LORRY-MEN TAKEN TO HOSPITAL
Jam, cucumber and tomatoes were scattered over the High Street, Weedon, Northamptonshire, today when three lorries were involved in a collision.....
HIT BY AEROPLANE
COMPANY SERGEANT-MAJOR'S DEATH
How a company sergeant-major in the Territorial Army met his death during special aircraft training at Telscombe on July 26 was related at a Brighton inquest today on William George Outlaw (35) of Lowestoft, a lamplighter by occupation ... 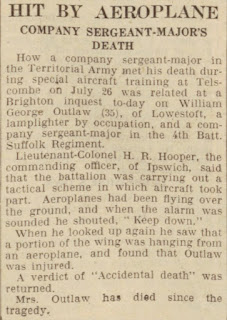 The early 1930s were a period of transition for transport in Britain. By 1934 there were some two and a half million motor vehicles on the streets and roads of Britain. Road accidents were becoming more common, a fact brought home to the new Minister of Transport, Leslie Hore-Belisha, earlier that year when he was almost run over in Camden. One of the ways in which he tried to make roads safer was the introduction of the flashing beacon (which was named after him) at road crossings. In the air, plane crashes were widespread, and as the case of William Outlaw so sadly shows, the dangers were not limited to the air passengers.

The wedding has taken place at St. Giles's Church, Normanton, of Miss Margaret Phyllis Jane Brayfield Memmory, daughter of Mr. Brayfleld Memmory, building contractor, and Mrs. Memmory, of Brayfield House, Littleover, and Mr. Cyril Bell, of Osmaston Park Road, Derby. The bride wore a white gown with Brussels lace veil and wreath of orange blossom, and carried a shower bouquet of dark red roses and white heather. She was given away by her father and was attended by four bridesmaids. Miss C. Bell, sister of the bridegroom, and Miss Vera Bonner, the elder attendants, were in powder blue lace model gowns with small net frills and wreaths of silver leaves. The smaller bridesmaids, Miss Marjorie Memmory and Miss Sheila Johnson, the bride's niece, wore powder blue crepe-de-chine dresses and headdresses. The bride's mother wore a dress of cream Swiss embroidered lace and net with picture hat. Mr. Walter Memmory, of Farm Street, uncle of the bride, was the best man. Forty guests were present at the reception held in a marquee on the lawn at Brayfield House. The honeymoon is being spent at Scarborough. 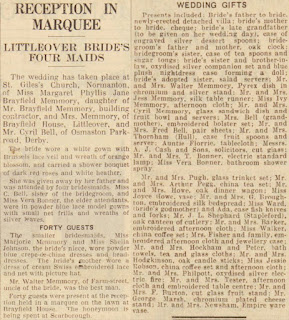 Whilst this article is long, it is worth reproducing because it is a near perfect exploration of economic and social history and it provides a fine counterpoint to the unemployed searching for bits of coke on the municipal tips. Not that Mr and Mrs Bell would be needing old bits of coke and coal - their wedding presents included an "oxydised silver electric fire". The gift list itself is a retail list of almost poetic proportions (I can almost imagine Sir John Betjeman reading it). 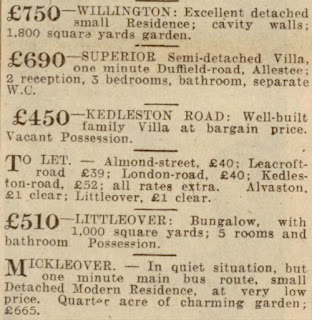 The scale of the generosity of Mr Brayfield-Memmory can be judged by the prices of some of the "villas" being advertised in the Evening Telegraph. The villa in Kedleston Road, for example was selling for £450 which in terms of 2016 is the equivalent of about £29,000. If you check on property prices in that road today, the houses are selling for about £300,000. By contrast the oxidised electric fire would be worthless today.

When they returned from their honeymoon in Scarborough, the happy couple could have had a night out at the cinema. Showing at the Cosmo in Derby was that years' "most outstanding screen triumph", "Lady For A Day". Directed by Frank Capra, it was nominated for three academy awards - but sadly got none. 1934 was a great time for the cinema - talking pictures widely available and the restrictions of what could be said and shown set out in the Hays Code had still to take effect. 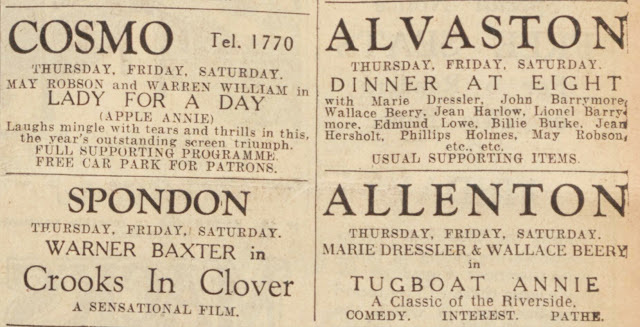