Random Times : Why Mischievous Boys Should Avoid Foreign Concoctions And Consume Their Own Steam

This week our random number generated time machine is whisking us back to 1884 and the very heart of Victorian Britain. Gladstone was Prime Minister and the Third Reform Act was passed by parliament. However, this did not make Britain a democracy: many men - and all women - were still denied the right to vote. That year saw the foundation of both the National Society For The Protection Of Children (compare and contrast with the Royal Society for the Protection Of Animals!) and the Fabian Society. The first skyscraper was being built in Chicago and bicycles were just beginning to become popular throughout the world. For reasons best known to itself, our time machine has landed in Whitstable, Kent and therefore our news comes via the pages of the Whitstable Times and Herne Bay Herald.

WALTHAM WATCHES. EXPLORATION OF NEW GUINEA.
"Acting on the advice of the Government Astronomer, two WALTHAM WATCHES were procured for Mr Morrison (the explorer of New Guinea). These were kept at the Melbourne Observatory for a fortnight, and thoroughly and carefully tested, and were pronounced by Mr Ellery (Government Astronomer) at the end of that time, to be better suited for Mr Morrison's requirements than any Chronometer" Extract, Melbourne Age. H W BEDFORD, Agent to the Company, 67 Regent Street (next St Jame's Hall)

I am sure that the two Waltham watches will have been great comfort to Mr Morrison when he was struck by two spears thrown by the angry residents of New Guinea during his expedition to that land. No doubt he could take comfort from being able to tell the exact time whilst he was lashed to the back of a horse and transported through the jungle in search of medical assistance. He was eventually evacuated back to Australia complete with the two spear heads that remained lodged in his body. Whether or not he was complete with the two Waltham watches, history does not record. 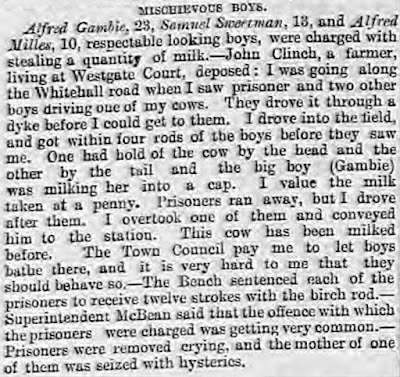 Alfred Gambie, 13, Samuel Sweetman, 13, and Alfred Milles, 10, respectable looking boys, were charged with stealing a quantity of milk. John Clinch, a farmer, living at Westgate Court, deposed: I was going along the Whitehall Road when I saw prisoner and two other boys driving one of my cows, They drove it through a dyke before I could get to them. I drove into the field, and got within four rods of the boys before they saw me. One had hold of the cow by the head and the other by the tail and the big boy (Gambie) was milking her into a cap. I value the milk taken at a penny. Prisoners ran away, but I drove after them. I overtook one of them and conveyed him to the station. This cow has been milked before. The Town Council pay me to let boys bathe there, and it is hard for me that they should behave so.

The Bench sentenced each of the prisoners to receive twelve strokes with the birch rod. Superintendent McBean said that the offence with which the prisoners were charged was getting very common. Prisoners were removed crying, and the mother of one of them was seized with hysterics.

Perhaps Mr Morrison in New Guinea should count himself lucky - he only had angry spear-throwing natives to content with. These three lads from Whitstable had the town magistrates determining their punishment and it was a harsh punishment indeed. The use of the birch was not abolished in Britain until 1948 (and it was still in use in the Isle of Man in the 1960s). If anyone for a single moment thinks that such punishment might restore order to society, I urge them to think for a second of a frightened ten year old who is about to be beaten for holding a cow by its tail.

STRAYED OR STOLEN : On Sunday last a BLECK RETRIEVER and BROWN OTTER HOUND. A reward of 5s will be given to any person taking the same to the Town Crier, Whitstable; and any person keeping the same after this notice will be prosecuted.

What is interesting here is not that someone pinched the otter hound (they are grand looking dogs) but the role played by the Town Crier. It would appear that the post of Whitstable Town Crier still exists today and the current incumbent is a Mr DP Allen. Perhaps I will take my dog to him and claim the five bob reward.

HOME GROWN WINES v FOREIGN CONCOCTIONS
In these days of chemical adulteration the public will do wisely to see that they get STONES BRITISH WINES. The high reputation of which has stood the test of more than two centuries. STONES celebrated QUININE WINE. Specially prepared. Strongly recommended by the highest medical authorities. Sold everywhere. FOR PARTIES AND FAMILY USE. WHOLESOME FOR CHILDREN

Only the British could advertise wine - and quinine wine at that - with a headline that proclaimed HOME GROWN WINES v FOREIGN CONCOCTIONS. In these days when we seem to have turned our backs on the rest of the world, perhaps we will need to start drinking Stone's British Wine once again. Pass a glass of quinine if you please! 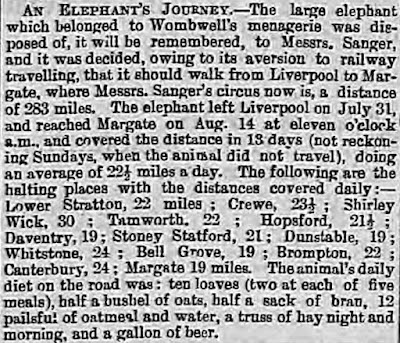 AN ELEPHANT'S JOURNEY : The large elephant which belonged to Wombwell's Menagerie was disposed of, it will be remembered, to Mssrs Sanger, and it was decided, owing to its aversion to railway travelling, that it should walk from Liverpool on July 31, and reached Margate on August 14 at eleven o'clock a.m. and covered the distance in 13 days (not reckoning Sundays when the animal did not travel), doing an average of 22 miles a day...... The animals daily diet on the road was ten loaves (two at each of five meals), half a bushel of oats, half a sack of bran, 12 pailful of oatmeal and water, a truss of hay night and morning, and a gallon of beer.

Travelling menageries were all the rage in Victorian Britain and people loved to see exotic animals. Both George Wombwell and George Sanger were leaders in this form of popular entertainment. It is not clear why Wombwell sold the elephant to Sanger, but the fact of the matter was that, at the time, Wombwell was in Liverpool and Sanger was at the other end of the country in Margate. The elephant, quite understandably, had an aversion to rail travel and therefore the only alternative was to walk the two hundred and eighty miles. The completion of such a hike is quite an achievement given that during the journey the elephant ate more than 100 loaves of bread and drank fifteen gallon of beer. 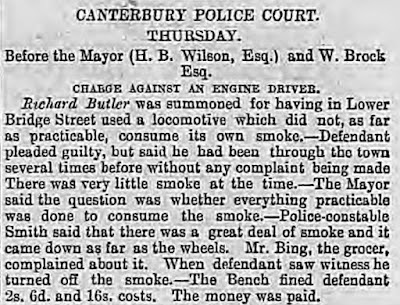 CANTERBURY POLICE COURT : CHARGE AGAINST AN ENGINE DRIVER. Richard Butler was summoned for having in Lower Bridge Street used a locomotive which did not, as far as practicable, consume its own smoke. Defendant pleaded guilty, but said that he had been through the town several times before without any complaint being made. There was very little smoke at the time. The Mayor said the question was whether everything practicable was done to consume the smoke. Police constable Smith said that there was a great deal of smoke and it came down as far as the wheels. Mr Bing, the grocer, complained about it. When defendant saw witness he turned off the smoke. The Bench fined defendant 2s 6d and 16s costs. The money was paid.

What we are talking about here is a steam carriage running on the public road and not a steam train on a railway. Not being mechanically minded, I am at a loss to see how it could be expected to consume its own steam. It is fascinating to note, however, the environmental cost of road transport was an issue over 130 years ago.
at August 23, 2016