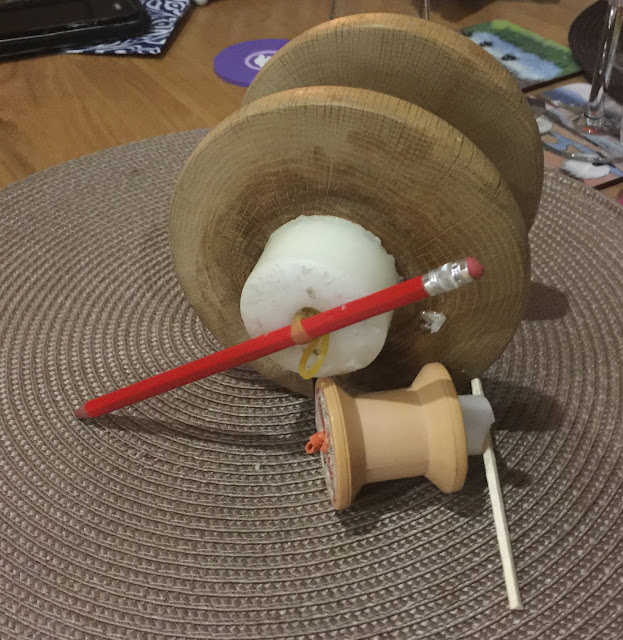 It was the contest of the century, the great decider, the true test of wills. It was David against Goliath, Tyrannosaurus Rex against a butterfly, Muhammad Ali versus Charles Hawtrey. It was wood against wood, candle wax against candle wax and elastic bands stretched to the tautness of a dress shirt on a fat man. Yes, at long last it was the Great Tank Race. 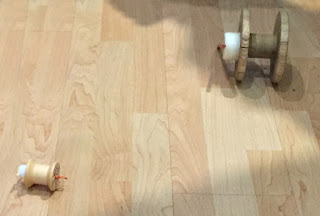 Paul had stretched the rules to their limits and entered a wooden behemoth straight out of a derelict Yorkshire wooden mill. In its previous incarnation, the bobbin had held enough thread to make socks for a whole army. By comparison, my little effort - modestly known for racing purposes as "Invincible" - had been home to a dainty skein of sewing thread.

After a false start or two when over-enthusiasm had caused elastic bands to curl beyond their limit of curliness and repairs had to be carried out in the pits, the race was on. The behemoth vibrated a little but thought better of it and remained stuck to its spot on the starting line like a housefly on a tray of treacle.

Little "Invincible" stormed into a lead, like a cotton reel bat out of hell.  Eventually the judges had to intervene to prevent further unnecessary punishment to the rooted behemoth. A winner was declared and the winner - it the best traditions of British sportsmanship - shook hands with the defeated loser, drank a hearty toast in rather splendid Japanese whisky, and returned "Invincible" to his little plastic box and a well-earned retirement.

Of course, I will not boast about my success on the cotton reel tank racing circuit, I'm not that kind of chap. I let plucky little "Invincible" do my talking for me and we will let the photographs tell the true tale of the night.

(Please Note : the final photograph has been digitally edited to better portray the winning margin)