Random Times : A Time Machine To The Light, The Dark, And A Jolly Good Hiding

A few years ago I did a series of blog posts in which I used a random number generator to identify small areas of West Yorkshire to visit and photograph ("West Yorkshire In Ten Squares"). Randomness is a great approach to investigating areas where the subject matter is almost limitless and one's ability to undertake a detailed and comprehensive analysis is constrained by an enhanced susceptibility to boredom. I have decided to once again crank up my steam driven random number generator and, this time, to harness it to a time machine. I am visiting the past via the archives of British local newspapers. The date will be determined by the date of my posts - the year will be the chance product of my random number generator. The first year it has selected is 1940, so we are going to investigate the random lives of British people courtesy of the Gloucester Journal. 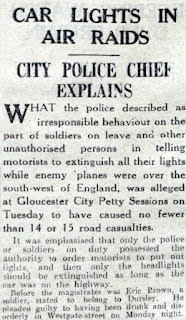 CAR LIGHTS IN AIR RAIDS
CITY POLICE CHIEF EXPLAINS
What the police described as irresponsible behaviour on the part of soldiers on leave and other unauthorised persons in telling motorists to extinguish all their lights while enemy planes were over the south-west of England, was alleged at Gloucester City Petty Sessions on Tuesday to have caused no fewer than 14 or 15 road casualties. It was emphasised that only the police or soldiers on duty possessed the authority to order motorists to put out lights, and then only the headlights should be extinguished as long as the car was on the highway. Before the magistrates was Eric Brown, a soldier, stated to belong to Dudley. He pleaded guilty to having been drunk and disorderly in Westgate Street on Monday night.


SIX DEFENDANTS FINED IN GLOUCESTER
Fines totalling £14 were imposed on Friday on six defendants who were summoned for having failed to obscure lights inside premises to prevent any illumination therefrom being visible outside. 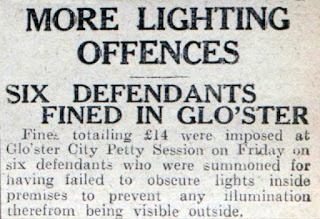 Our random number powered time machine has landed us back in wartime Britain. By August 1940, the war had been in progress for almost a year and the so-called "phoney war" that dominated the first few months of conflict is now a distant memory. France has been overrun by the Germans, British troops have had to flee from Dunkirk and the Battle of Britain is in full force. People looked with fear to the skies, especially at night. And the authorities were constantly on the lookout for any stray lights that would help pinpoint Britain's town and cities. 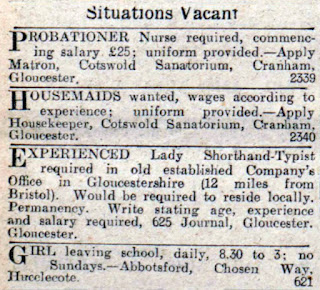 
The Situations Vacant column is by now the exclusive territory of women workers - conscription has already more or less removed men from the open job market. If the salary of £25 for a probationary nurse looks generous, it should be remembered that this is an annual salary and not a weekly or monthly one. If the nurses or the housemaids had stayed at the Cotswold Sanatorium, by 1949 they would discover that George Orwell was a patient there whilst finishing off his book 1984. The "girl, leaving school" advert we must assume, is an advert for a school-leaver to become some kind of daily housemaid.

PRIVATE E W KENT R.A.O.C. of 131 New Street, Gloucester, who is missing from the Lancastria, sunk by enemy action on June 17. Aged 24, he was formerly employed in the butchery department by the Gloucester Co-operative Society.


Edgar William Kent had worked in the butchery department of Gloucester Co-op. He died on the 17th June 1940 when the ex-Cunard liner, "Lancastria" was sunk whilst taking part in the evacuation of British troops from northern France during Operation Ariel.


Less well-known than Operation Dynamo (the Dunkirk evacuations which had taken place two weeks earlier), Operation Ariel was the name given to the attempts to evacuate British troops and civilians from Western France during the fall of that country to the German occupation. The 1,300 passenger Cunard liner, Lancastria, was crammed with up to 5,000 troops and civilians when it was bombed and sunk in St Nazaire at the mouth of the River Loire. No one knows exactly how many people lost their lives in that disaster, but it is at least 3,500, making it the largest British maritime disaster in history. One of that number was Edgar William Kent. 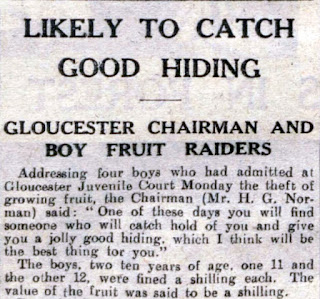 Addressing four boys who had admitted at Gloucestershire Juvenile Court Monday the theft of growing fruit, the Chairman (Mr H G Norman) said: "One of these days you will find someone who will catch hold of you and give you a jolly good hiding, which I think will be the best thing for you". The boys, two 10 years of age, one 11 and the other 12, were fined a shilling each. The value of the fruit was said to be a shilling.


Surely nothing illustrates the passage of time so much as this report of what was little more than youthful scrumping. Today it would have been Mr Norman who would have been thrashed for saying such things. 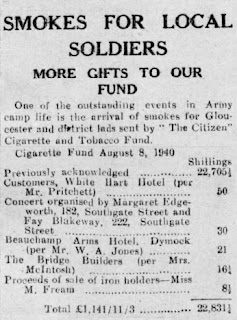 SMOKES FOR LOCAL SOLDIERS
MORE GIFTS TO OUR FUND
One of the outstanding events in Army camp life is the arrival of smokes for Gloucester and District lads sent by "The Citizen" Cigarette and Tobacco Fund.

HELP FOR OUR CIGARETTE FUND
The party of children who raised 45/- at a concert given in Theresa Street.


Perhaps this is another illustration of the passage of time. Today, sending a box of cigarettes to someone would be seen in itself as a declaration of war. 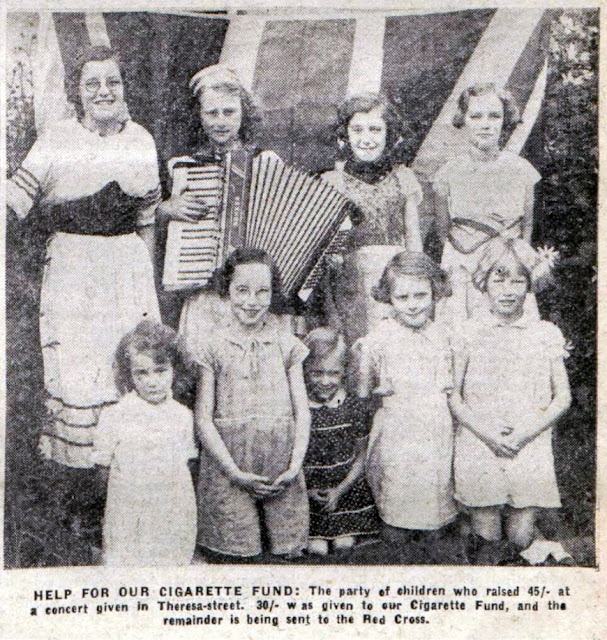