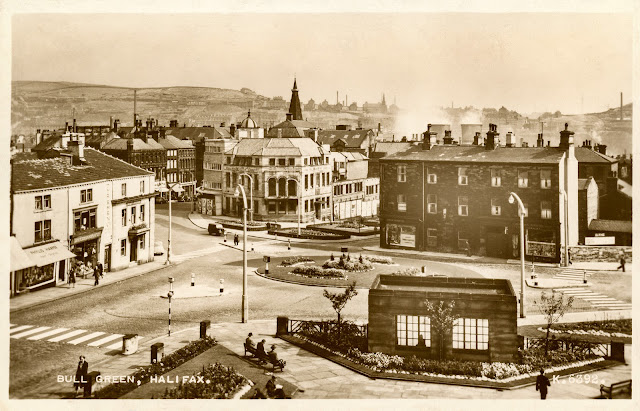 Bull Green, Halifax in the 1950s. Little has changed as far as the built environment is concerned, but it is a different world revolving around the roundabout these days.


I suspect that this postcard dates from the 1950s, but as it was never postally used I have no proof of that. The Bull Green we see in the photograph is certainly the Bull Green that emerged from the redevelopment of the area in the early 1930s, and one suspects that the photograph was taken from the newly built Bull Green House. A similar photograph today wouldn't be all that different: most of the buildings you can see have survived (other than the rather ornate bus shelter). The road layout is different as are the crossings, and you would have to be up very early in the morning to see so few cars on the road.


Some say that Bull Green got its name from a bull baiting arena; others say it was the site of an old cattle market - as was the adjacent Cow Green. Why there were two distinct markets, I do not know:  some strange Methodist propriety perhaps?
at April 03, 2019