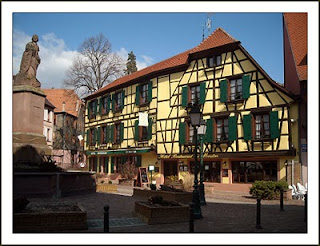 I am back following a most delightful few days spent in Alsace, Eastern France. It might have started as an excursion to see a Leonard Cohen concert - which, as I mentioned in my last post, was cancelled when the Sainted One fell off his exercise treadmill - but it finished up as a most successful exercise in cramming as much pleasure into five days as possible. There was a day spent in London which was evenly balanced between visits to public galleries (The Courtauld and the Tate Modern) and galleried pubs (the splendid George Inn in Southwark and several others to make up the set). There was a delightful day and a half spent in the small town of Ribeauville where we stayed at the almost unbelievable Inn pictured above, from where I climbed high into the hills to the even more unbelievable ruined castle pictured below. And there was a further delightful day and a half spent in the magnificent city of Strasbourg with its massive cathedral, ancient buildings and specially organised picturesque snowfall. 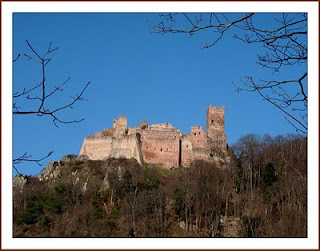 Many, many great memories and a few half-decent photographs. Thanks to Tim and Will for being such  amusing, eloquent and intelligent hosts and, of course, to Chrissy for being such a delightful travelling companion. There will, I am sure, be other chances to see and hear Leonard, but I wouldn't have missed my trip to Alsace for the half the perfect world.
at March 09, 2010