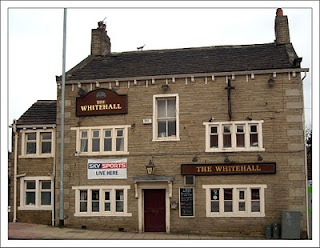 The Whitehall Hotel, Leeds Road, Hipperholme, Halifax HX3 8NA  Tel : O1422 202088
Step over the threshold of the Whitehall Hotel in Hipperholme on some quiet lunchtime and you feel as though you are intruding on someone's private grief. It is not an unusual feeling in these days when the majority of beer sales are delivered via the supermarket check-out rather than the polished brass hand-pump. Don't let it put you off calling by : the Whitehall is a fine pub of a type that is rapidly vanishing from the villages and townships of Britain. But be prepared for a chaser of melancholy with your lunchtime pint. 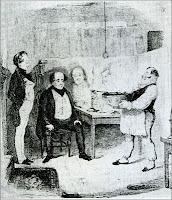 The building dates from late eighteenth century and is currently Grade II listed. It probably took its name from the nearby White Hall House, but it is the pub which itself gave its name to the Leeds Whitehall Road which for much of the last two hundred years has been the main thoroughfare between Halifax and Leeds. In the 1830s the Inn provided one of the stops for the regular stagecoach service between the two West Yorkshire towns : a service which had the surprisingly modern name of the "Red Rover". A picture exists of the interior of the Inn at the turn of the nineteenth century and from my own personal observations it appears that little has changed other than some of the regulars depicted in the earlier picture no longer seem to be attending. The ring hanging from the ceiling is part of a once-popular bar room game called "ringing the bull" in which a ring suspended from the ceiling would be swung to try and connect with a hook hung on a wall, often on the end of a bull's horn. 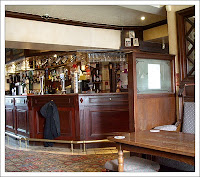 Today the ring and the bull's horn are long gone but you still half expect the Dickensian gentleman with the stretched waistcoat to make his way back from the toilets (could that be his jacket which is still hanging from the bar?). The decor is strongly influenced by tobacco and although in the two years since smoking in public was outlawed the aroma has drifted away, the tint still remains. I sometimes feel that you should be able to make out a special case for the current anti-smoking laws to be annulled in certain premises in order to maintain historical authenticity. The Whitehall Hotel could serve as a test-bed for such an innovative approach : the low ceilings and the mullioned windows set in the thick stone walls cry out for a patina of Old Shag.

I had a pint of Copper Dragon Golden Pippin (3.9% ABV) which was probably historically an inappropriate choice - it should have been something old and dark and tasting vaguely of creosote. The Golden Pippin was none of these things and was rather refreshing. This goes to show that even I am willing to embrace modernity. Once suitably fortified by whatever your choice of beverage might be, and as you leave the pub and make your careful way across the busy main road, you might want to cast a glance back at the roofline of the pub. Is that a cat creeping along the ridge tiles? It has been frozen in the same position for many a year now - proof if ever it was needed that things move slowly around these parts.
at March 21, 2010

Email ThisBlogThis!Share to TwitterShare to FacebookShare to Pinterest
Labels: GYP