Postcards From Nowhere : To my son Clement 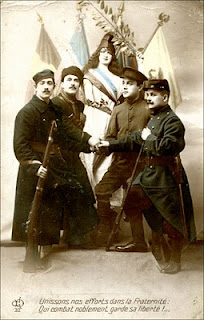 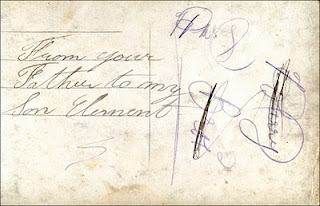 Each week I try to pull out a random card from the vintage postcards collected by my Great Uncle Fowler and look at it in a little more detail. This week the postcard is a French World War I propaganda card. The words under the picture of four soldiers say "Unissons nos efforts dans la Fraternite, Qui combat noblement garde sa liberte" which, I guess, mean something like "Through our united efforts in brotherhood, we will fight to nobly defend our freedom" (if you have a more accurate translation please let me have it). All that is written on the back is "From your Father to my Son Clement" I don't know of any Clement's in my family so I am not sure how it came to be in Fowler Beanland's collection. But there is something strangely touching about those few brief words written on the back. It makes you want to weep for the war, weep for the death and destruction and weep for a time when father and son could only express their love through such stilted phrases
at March 17, 2010

Email ThisBlogThis!Share to TwitterShare to FacebookShare to Pinterest
Labels: PFN