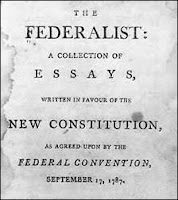 I accept that there can be few things more introspective, more conducive to deep navel-gazing, and more potentially boring than blogging about blogging : but here I go again. Those who have read the last fourteen chapters of my forthcoming book "In Search Of A New Paradigm in Contextually Integrated and Networked Proclamations" will know where I have got to in my search for an answer to the age-old question facing us all : to consolidate or follow the advice of Chairman Mao and "let a hundred flowers blossom and a hundred types of blog contend". I was swinging very much in the direction of the consolidation school when I decided to investigate the counter-claims of the Federalists : and they have certainly made me pause for thought.
I always think that the three greatest things given to the world by the United States of America and its diverse and wonderful people are (1) popular music; (2) innovative communications; and (3) federalism. I shouldn't have to say anything in support of my first choice being included in the list, the chances are we all support the nomination every time we hum a tune. As for innovative communications, all you need to do is imagine what that great British invention the World Wide Web would have been like if we had developed it on our own! Things like Google, Blogger and Facebook can only be American and - however annoyed we get with them - I believe they rank as great human achievements. Which leaves me with federalism. Now is not the place to venture into the political significance of the federalist writings of the great American pioneers - let it merely be said that we in Europe are still trying to learn the lessons 250 years later.
If we apply federalist principles to blogging what we have is a series of separate and quasi-independent blogs all gathered together within a common federalist framework. I can therefore keep Fat Dog, Pint of Bitter, and Daily Photo as separate States within the cultural hegemony of News From Nowhere. It is an exciting thought, I am sure you will all agree. I will ponder on it further and report my findings in the draft of Chapter 16. 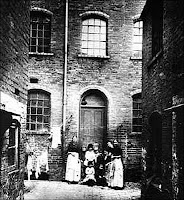 By way of diversion, let me conclude with a completely unrelated quotation. Yesterday, I found myself with a couple of hours to spare in Bradford Central Library. In the spirit of serendipity, I pulled a book at random from the shelves of the Reference Library and started to read. It was a collection of the reports of the "Female Sanitary Inspector" for Bradford - Miss C F Stephens - to the Health Committee of Bradford Corporation. I quote from her report dated 31st December 1902 in which she tells of a visit to one typical slum in what, at the time, must have been one of the richest cities in the world.
“Fourteen occupants in a three-roomed house. Bedroom : 1334 cubic feet, occupied by seven persons, equalling six adults. Bedroom : 810 cubic feet, occupied by three adults. The parents and youngest two children slept downstairs. The second time I visited this house the parents were in bed, and there were nine other members of the family in the room. In this case the woman resolutely refuses to allow a window to be opened, “for”, she says, “that is how scarlet fever comes into the house”. Meanwhile the filth of the house and the impure air, added to the gross overcrowding, render it a perpetual wonder that the whole family are not the victims of some loathsome disease. These people are now under Notice to abate the nuisance, as they declined to do so without pressure”.
If nothing else, it makes you think and helps you get things in perspective. As I say, it is completely unrelated to the first part of this post. But now I come to think about it, it raises the question of how we can open the windows of our blogs to fresh ideas without risking the dangers of scarlet fever. I obviously need to lock myself up in a dark room and do some thinking.
at March 24, 2010