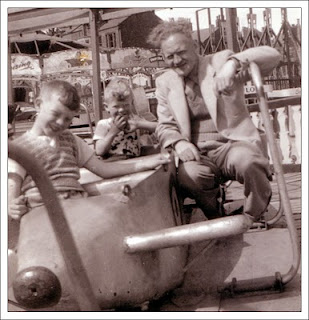 You know you are approaching your sell-by date when you discover that you are the subject of one of your own Sepia Saturday postings. Why the above photograph - which shows my brother Roger, myself, and my father at some funfair or other - should be sepia I don't know. It must have been taken about 1950 or 1951, long after the introduction of photographic paper coatings which no longer degraded over time to give the familiar sepia shades. I suspect that the monochrome print had been left in the sun for too long and the fading process just took the edge off the blacks.
It must have been taken in either Bridlington (on the east coast of England) or New Brighton (on the west coast). For some reason we would always alternate our family holidays between these two resorts - one year staying at a boarding house in Wellington Road, New Brighton, the next at a boarding house in New Burlington Road, Bridlington. Both streets still exist and I have just "visited" them using Google Earth and I am struck by how little seems to have changed - other than the fact that all the houses are now private residences.
My brother is five years older than me and therefore must have been about seven or eight when this picture was taken. My father died in 2002 when he was 91 (I wrote about him last year in my Family Six Pack series). Roger went on to become an artist and a sculptor and he now lives on the Caribbean island of Dominica. And as for the cute little chap in the middle? He went on to do a little harmless blogging.
You can take a look at the other Sepia Saturday posts by visiting the Sepia Saturday Blog. Most people now tend to add their link after they have posted so you may want to delay the start of your tour until all the links are up which should be by the end of Saturday.
at March 20, 2010