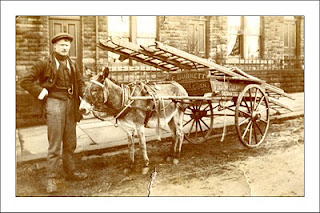 I know that this is a photograph I have used on the blog before, but when I used it last, I converted it into a rather cold grey-scale image. So today I thought I would use it again, but in all its sepia glory. It shows my paternal grandfather Enoch Burnett, with his donkey and cart and his set of ladders in the early 1900s. I am not sure of the exact date : the inscription on the cart proudly declares that the business was "Established 1906" and the photograph was certainly taken before the Great War. I have written about Enoch before (see A Family Six Pack Part 2 : Enoch Burnett). He was the stuff of family legends: the one member of the family of whom tales were told long after he had died (in 1950). During the summer he worked as a window cleaner and during the winter - when the weather was bad and people in Bradford weren't bothered if they could see out of their windows or not - he traded as a watch and clock repairer. Although I cannot remember meeting Enoch (I was only two years old when he died), I can remember visiting my grandmother and discovering, in her little back-to-back house in Bradford, a treasure house of old long-case clocks - presumably goods brought in for repair and never collected.
The picture is one of my favourite family photographs and I don't need too much of an excuse to dust it off and bring it out again : but the excuse is that I wanted to repeat the short description of the sepia toning process I gave when we first started Sepia Saturday. The term "sepia" was originally given to a brown pigment used by artists which was derived from the ink sack of the Common European Cuttlefish (Sepia officinalis). When, in the late nineteenth century, a chemical process was developed which converted any remaining metallic silver in photographic prints, to a sulphide - which is much more resistant to breakdown over time and which produced a brown-grey tone - it was called sepia toning. Sepia prints are more resistant to fading and chemical decomposition which is why most of the early prints we can still see are sepia toned ones. By the second decade of the twentieth century, photographic processing had advanced  and chemicals were available which could reduce the amount of fading for normal grey-scale prints and sepia toning was used less and less. Eventually it became a specialist technique used to make photographs appear old rather than to preserve them.
Your photographs don't have to be in sepia to become part of the Sepia Saturday project : just old and soaked in memories. To see other sepia posts this week, go over to the Sepia Saturday blog. Sepia Saturday will return on Saturday April 10th.
at March 27, 2010

Email ThisBlogThis!Share to TwitterShare to FacebookShare to Pinterest
Labels: SS