Postcards From Nowhere : A Girl-Less Gibson

Each week I take a random dip into my collection of vintage postcards and investigate what comes out. 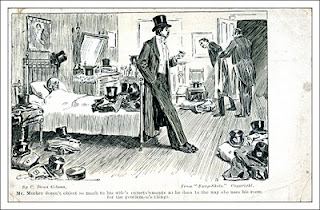 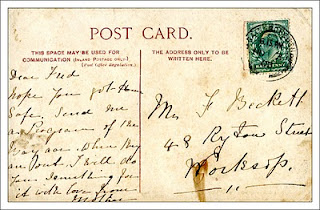 Charles Dana Gibson (1867 – 1944) was an American graphic artist whose work was widely published in books and magazines in the late nineteeth and early twentieth century. As this period coincided with the golden age of postcard collecting, his pen and ink sketches were also a popular subject for postcards. He is perhaps most famous for his depiction of the stylized, wealthy and glamorous new-century woman that became known as a "Gibson Girl". The style and look is said to have been based on that of his wife Irene Langhorne and her sister Nancy (who would later marry Waldorf Astor and - as Lady Astor - become the first  woman to become a member of the British Houses of Parliament). As an early practitioner of the craft of syndication - selling your work to a whole range of parallel publications - Gibson became one of the most successful illustrators of the time, made a fortune, bought an island in Maine, and also bought Life Magazine.
My Gibson postcard does not, unfortunately, feature any Gibson Girls. The somewhat risqué caption on the face of the card below the illustration reads "Mr. Meeker doesn't object so much to his wife's entertainments as he does to the way she uses his room for the gentlemen's things".  There is neither a catalogue number nor a publisher listed on the card. It was postally used in what looks like November 1903 and sent to Mr F Beckett of 48, Ryton Street, Worksop. The message opens "Dear Fred" and appears to come from his mother. As far as I have been able to interpret it, the message is as follows:
"Dear Fred. Hope you got home safe. Send me a Programme of the Bazaar. When they are out I will do you something for it. With love from Mother"
The card was posted in Gainsborough, Lincolnshire which is a relatively short train journey away from Worksop. It would appear that Fred had been to visit his mother. The "when they are out" phrase leads me to think that his mother might have been in service as a cook or housekeeper, this being the golden age of not only postcards but also of domestic servants. But what was the bazaar and who was Fred? Answers on a postcard please. Send them to me.
at March 23, 2010

Email ThisBlogThis!Share to TwitterShare to FacebookShare to Pinterest
Labels: PFN